Having lost a lifetime of research in the worst floods Sydney has witnessed, Daniel—a climatologist and advisor to the government—isn’t in the mood for appreciating the irony of what he should have predicted.

Paralysed by the knowledge that the world is consuming itself, Daniel takes little joy in planning for his future—somewhat of a problem for his spirited other half, Fiona. When Fiona tells Daniel they’re about to start a family, Daniel must choose between what he knows and what he loves.

An urgent and searching new play about the most pressing issue of our times, Between Two Waves asks an anxious, warming world: how do we find happiness in the face of an uncertain future?

A politically charged relationship drama set against a climate change backdrop, Between Two Waves is the first play to be produced out of the Griffin Studio, by one of the most talented new voices in the country. 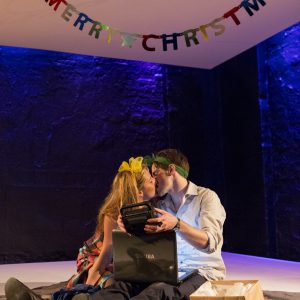 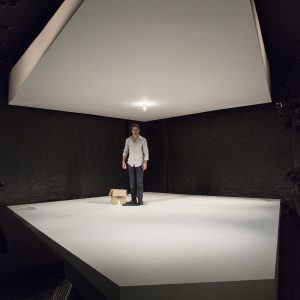 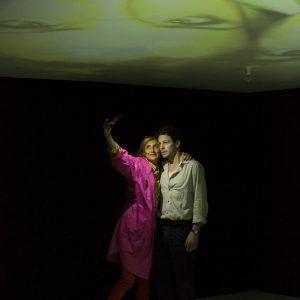 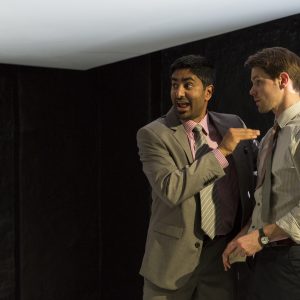 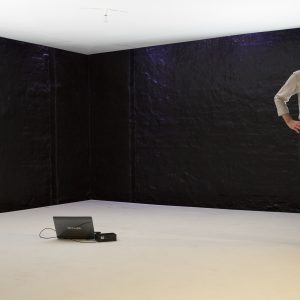 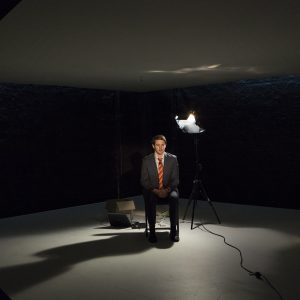 “[Sam] Strong deals the play’s shuffled scenes with his customary assurance and the drama flows seamlessly…a gently unsettling portrait of the times we live in.” Jason Blake SMH

“Sam Strong’s production is tautly elegant and doesn’t miss a beat. Neither does his excellent cast” Sun Herald

“5 stars. Daniel’s aria of doom is a showstopper…Fiona’s tender resuscitation of him is one of the more beautiful, vulnerable moments of human contact we’ve seen on stage all year…Between Two Waves boldly takes on some incredibly profound questions. The result is a work of immense and lasting impact.” Time Out

”Between Two Waves is a fresh and interesting work, attempting to debate vital social issues within a very contemporary rom/com. I recommend it.” Kevin Jackson’s Theatre Diary

”..a warm-hearted, entertaining look at a terrifying topic.” Concrete Playground

“The kind of theatre that bypasses your brain and gets you in the soul…Ian Meadows delivers a remarkable performance…an outstanding piece of theatre and one I wholeheartedly recommend. Go see it.” Australian Stage online

“This reviewer, for one, wanted to run through the streets yelling happy expletives afterwards. 4 stars”. Arts Hub

“Political despair and the facts come crashing in stunningly…Meadows plays Daniel, in a fine performance…Ash Ricardo is very strong and lively.” John McCallum The Australian

”It must be said that yet again Sam Strong has made a wise decision in programming Between Two Waves. It’s a wonderful end to his stewardship at The Griffin.”  Stage Whispers

”Sam [Strong] has a knack for bringing something to the stage that you would not normally expect to see, but it works and leaves you talking about it for hours afterwards.” SameSame

“Stunning…beautifully affecting, offering both the adrenalin of a thriller and the quivering tingle of a truly heart-warming personal story.” themusic.com.au

“If this is the first offering from the Griffin studio, it augurs a whole lot better for the future of new Australian drama than our carbon emissions do for our future.” Crikey Curtain Call

”Strong’s last show at Griffin is an ideal farewell. This play feels fresh and relevant without being preachy.” Altmedia.com

Between Two Waves opens this week! Check out this video to find out about climate change, relationships, Ash Ricardo’s stockings and what Chum Ehelepola really thinks about Ian Meadows’ script.  Playing until 17 November Book tickets online Click here for...

Next up, Sam Strong directs his final play as Griffin Artistic Director – Ian Meadows’ searching new play Between Two Waves. A politically charged relationship drama which explores one of the most pressing issues of our time, we asked Ian to...

Between Two Waves will be cruising onto the SBW Stables Stage on 5 October. The show is directed by Sam Strong in his final play for Griffin as Artistic Director. We asked him to take time out of rehearsals to...

Inspired by the issues explored by current show Between Two Waves, Griffin and Purves Environmental Fund co-hosted a forum on climate change on Saturday 27 October. We were joined by speakers from 1 Million Women, Australian Youth Climate Coalition and The...

Once we move beyond the polarising arguments about the existence of climate change, how do we bridge the gap between knowing and doing? What is the tipping point between social acceptance and social investment?  In a fascinating forum co-presented by... 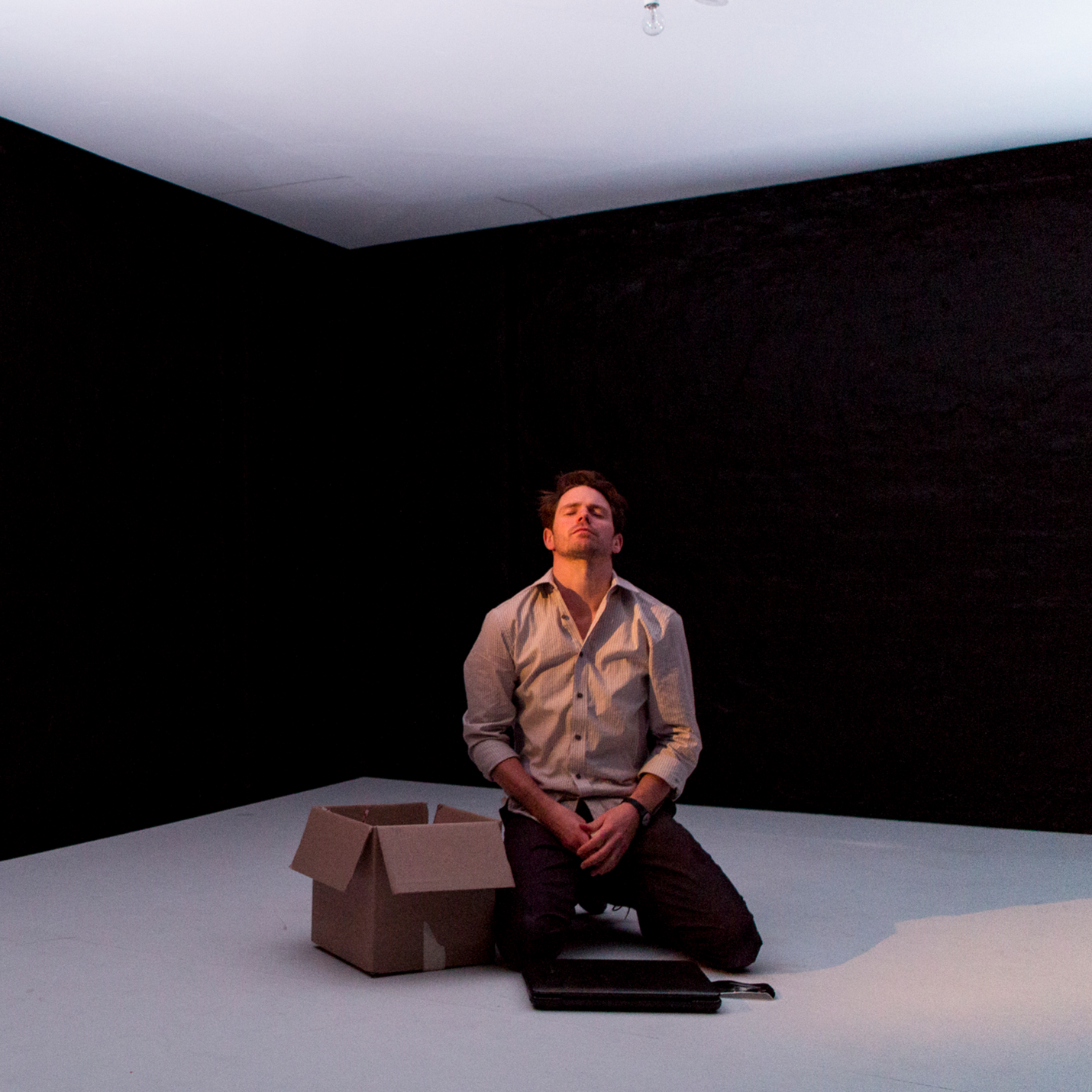 Did you hear our wonderful Associate Artist Andrea James on @RadioNational's THE STAGE SHOW this morning? Andrea is directing GHOSTING THE PARTY, which begins previews this Friday 20 May! Listen to the episode: https://t.co/WzCh8eWJ0m 👻🎉
Book now https://t.co/vHoz5pC6Aq

We are thrilled to announce that the Griffin Studio artists for 2022 are Bedelia Lowrenčev, Bernadette Fam and Megan Wilding!

Learn more about the artists and Griffin Studio over on the Griffin website: https://t.co/RtYvoQ0HX1 #GriffinStudio #Griffin2022

Our Guest Presents screening of Harold & Maude at @goldenagesydney is on tomorrow night! 🎉 All film attendees receive a cheeky offer for GHOSTING THE PARTY at Griffin—previews start this Friday 6 May! Book now for black comedy galore 🎥 #GTCGhostingTheParty