“Last week a man slept in my house. I am sure he has a wife. The skin around his ring finger is indented. And there was a number in his phone under ‘Wife’.”

They met online. She’s a nurse in her forties, brats for kids, trapped in a loop of catastrophic debt. He’s in IT, miserably married and trapped in his own loop of nightly porn-trawling. Both of them crave something else – but not necessarily each other.

The terrific mind and nimble fingers of playwright Declan Greene have crafted an astonishing new work. Eight Gigabytes of Hardcore Pornography is directed and brought to vivid, sweaty life by Griffin’s own Lee Lewis.

A co-production with Perth Theatre Company. 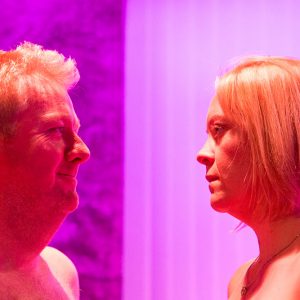 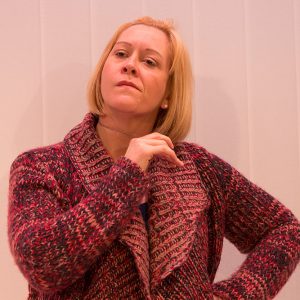 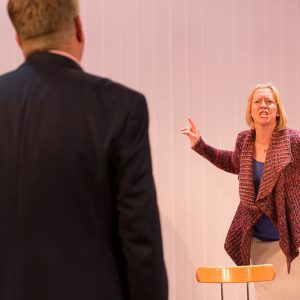 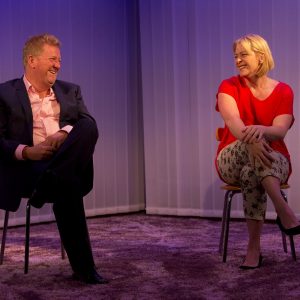 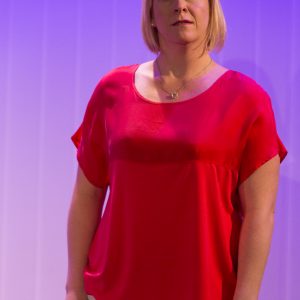 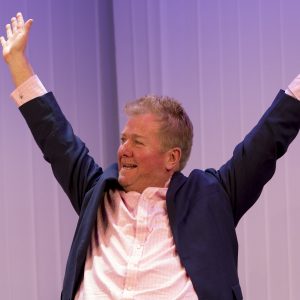 “There’s no place for an actor to hide in Greene’s script. Every line and every beat demands to be rung true and Rodgers and Gibbs do just that, negotiating the play’s cringe-comedic twists and bruising turns flawlessly ….” Jason Blake, The Sydney Morning Herald

“Greene has a beautiful sense of character and writes appealingly frank dialogue; I wanted (I still want) to know more about them – where they came from, where they’re going.” ★★★★ TimeOut Sydney

“His eye for economy is as merciless as it is effective … Lewis’s cast is unimprovable. The man could be entirely repugnant as he revels in his deceits and fancies but, against all the odds, Steve Rodgers demands to be understood. Andrea Gibbs, who is primarily a comedian, is a revelation: maddening, oddly gallant and incredibly touching.” Deborah Jones, The Australian

“Eight Gigabytes of Hardcore Pornography is astonishingly good. This is some of the best theatre I’ve seen in 2014. It is excruciatingly accurate, brilliantly pointed in its portrayal of insecurity and addiction. I was utterly transfixed. Lee Lewis has done a masterful job directing what must have been a very difficult script … an absolute must-see.” Jodi McAlister, Australian Stage

“…the actors are triumphant. Eight Gigabytes may be unrelentingly dark … yet with its compelling human secrets, it’s surprisingly funny. It’s a play for all of us.” Martin Portus,★★★★ ArtsHub

“Rodgers and Gibbs make an impressive duo, well-matched in their comic rhythm and honesty.” Jessica Keith, The Guardian

“Rodgers and Gibbs give unflinchingly brave performances as they mine their characters’ addictions, vulnerability and longing with devastating authenticity, bringing warmth where it might easily not exist.” Jo Liston, Scene and Heard

“What must be congratulated is the work of both Declan Greene and Lee Lewis to expose and present this contemporary crisis we are experiencing where we sabotage and self-harm through secrecy or through gluttonous excess.” Augusta Supple

“Under the austere direction of Lee Lewis, actors Andrea Gibbs and Steve Rodgers brilliantly, forensically, portray an unnamed couple of 40-year-olds who declare themselves at the outset to be “stupid and fat and boring and ugly and old. Both reach out via the internet and meet amid the ruins of their adult lives … Both Gibbs and Rodgers deliver searing, up-close portraits of extreme unhappiness and wracked despair.” Frank Hatherley, Stage Whispers

“Both actors are inspirational in their meticulously measured performances lending optimal impetus to a brilliant world-beater of a play. Greene treads a dangerous line between mercilessness and empathy with success … Griffin has scored gold with this great work.” Lloyd Bradford Syke, Daily Review

“Declan Greene is a playwright that just seems to be getting better and better with every work he creates. His ideas, his script, his use of language seem to all become more honest, more certain and more astute with every new character he creates.” Rita Dimasi, ArtsHub

“It’s thrilling to read a play as effortlessly bold, as contemporary and as moving as Declan Greene’s new work. Compelling and repulsive, Greene immerses us in the lonely world of over 40′s internet dating, its everydayness, joy and gut-wrenching misery. Out of a very strong field this play stood out because it is very, very funny, quite appalling, minutely observed and an extremely modern telling of a very old story: that we are human, all too human.” Chris Mead, former Artistic Director of Playwriting Australia and judge of the Max Afford Playwrights’ Award 2012

Declan Greene’s fierce and astonishing new play Eight Gigabytes of Hardcore Pornography plays from 2 May-14 June. Check out the trailer.

Eight Gigabytes of Hardcore Pornography star and acclaimed comedian, Andrea Gibbs took time out from the rehearsal room to tell us a little about herself and why she thinks Declan Greene pushes old ladies down stairs… I grew up in Donnybrook, a... 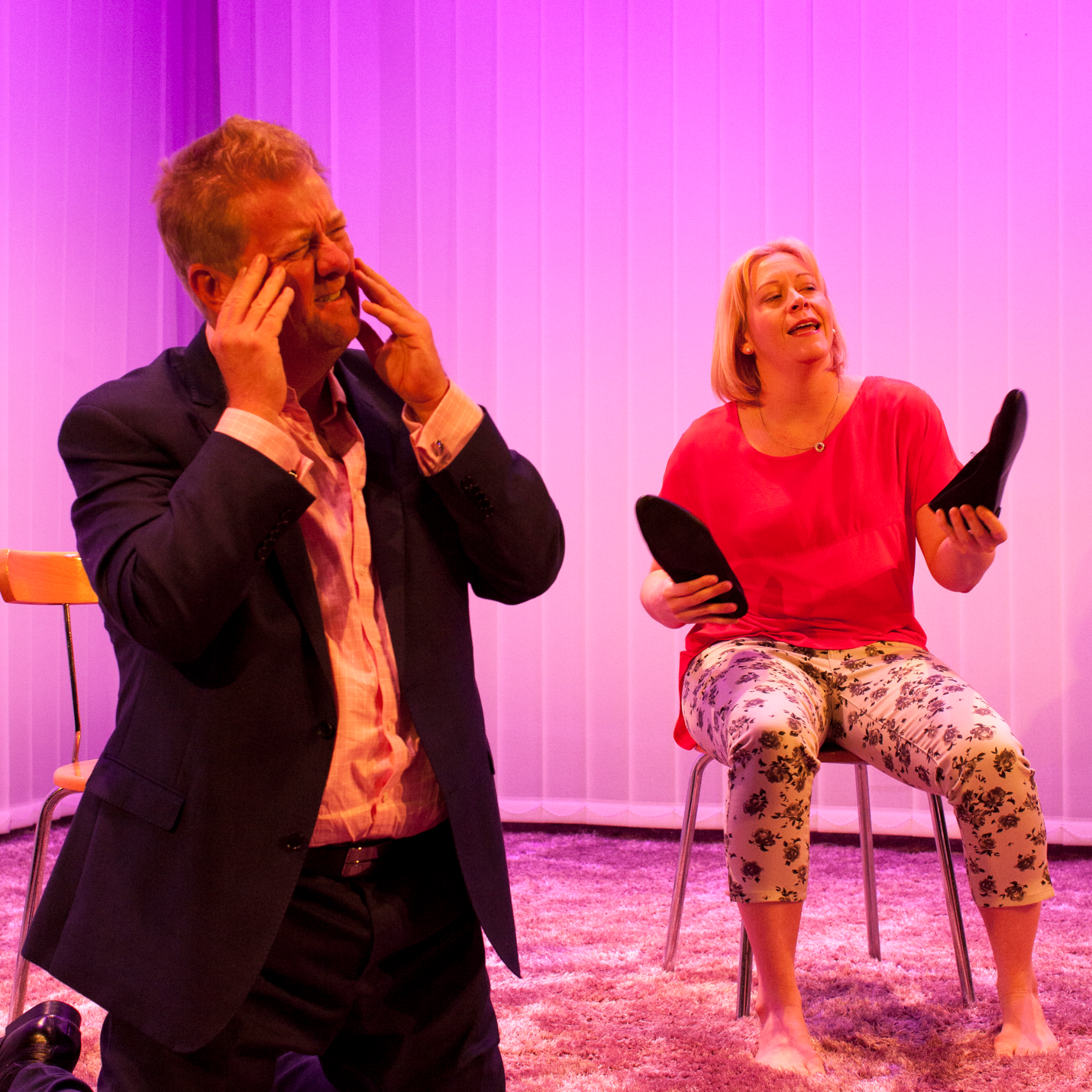 Griffin is thrilled to announce that in an enormous act of generosity, the Neilson Foundation has made a multi-million dollar gift to allow us to purchase the SBW Stables Theatre—paving the way for a major redevelopment of the theatre! https://t.co/6WYK6T01Xf

Music The Violent Outburst that Drew Me To You