In conversation with Justin Fleming

What first inspired you to the classics and  Moliere?

French was the only modern language taught at my school. My parents knew French and I had two aunts, Judith and Elizabeth, who both taught senior French. French people sometimes ask why so many Australians have studied French and my standard reply is that (a) It was considered the language of diplomacy, (b) Australia is surrounded by a few French island nations and (c) French is the language of food. At school and University, I studied some French drama, and for my own interest, I read Zola’s novels. My first foray into adapting a French classic for the stage was Zola’s Au Bonheur des Dames which I called The Department Store. It was successfully produced by Parnassus’ Den Theatre Company at the Old Fitzroy. A few years later, Bell Shakespeare asked me if I were interested in translating Tartuffe. Right at that moment, I was awarded a writer’s residency on the island of Elba and when I was asked what I would do there, I replied “Tartuffe.” Pete Evans was working at Bell Shakespeare when the script landed, and also Carolyn Burns asked me if she could read it. She gave it to Simon Phillips, then Artistic Director at MTC. Simon rang one day and asked me if the rights were available. Keeping him on the mobile, I rang John Bell on the landline and asked if he would be programming it. John said that he would like to do it but not immediately, and though he wanted to keep it in his repertoire for the future, that I should say yes to Simon. Simon said: “That was quick!” By that time, Pete Evans was Associate Director at MTC, and as Malthouse was also doing a version of Tartuffe, he asked if MTC could give it its subtitle, The Hypocrite. Pete’s beautiful production was a resounding success, masking (my) flaws in the text (the best kind of director!). 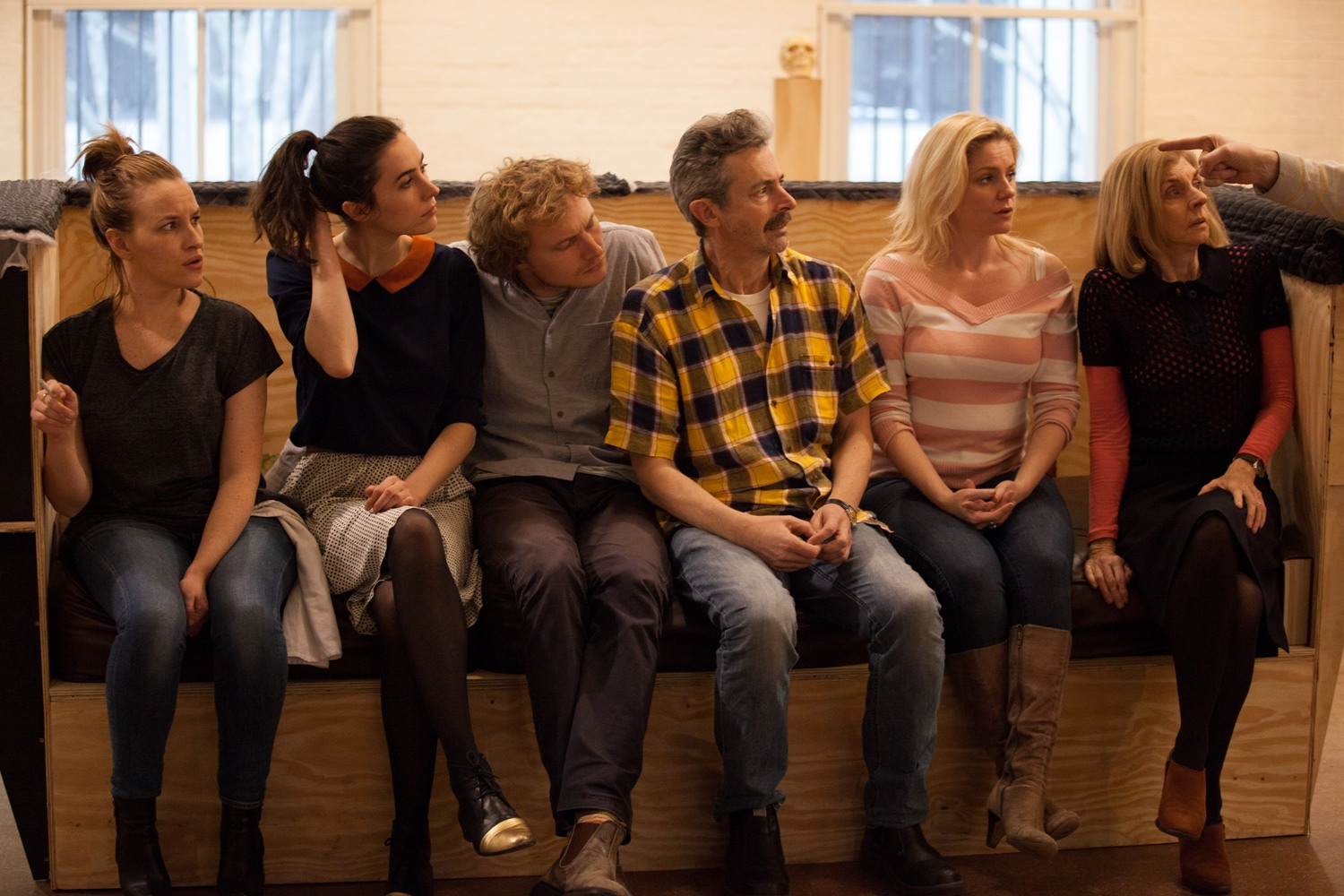 What is the process of translation from 17th century to Modern Day like?

It’s not only a question of shifting centuries, but also shifting language. I try to give the play a sense of then and now. This means a combo of lyrical sophistication and recognisable Anglo-Aussie vernacular. I also vary the rhyme scheme, so the audience listens rather than waiting for the rhyme to land. Though Molière used rhyming couplets throughout, his audience was used to them, and in French, where it is easier to rhyme, they have less intensity. For variety’s sake, and to give themes their breathing space, in scenes on lofty pretentiousness, I used the rhyming couplets (AABB). When the subject is love, the rhymes are on alternate lines (ABAB). And for wisdom and true scholarship, the rhymes fall on the first and fourth lines, and the second and third lines (ABBA). The responsibility for this novel approach is my own – and I thank Michael Worton, Fielden Professor of French at University College London for giving me the thumbs up.

The other aspect is attitude. Molière had to do some serious grovelling to Louis XIV to get permission to have his plays produced. What got him over the line was that Louis found the plays very funny. His mother – adamantly – did not. But Louis gave Molière the green light and the rest is history. Today, though playwrights do a serious amount of grovelling to Griffin to have their work produced (ha! ha!) there is no constraint upon the subject matter. And it is still very funny because both Molière and we live(d) in a world of spin. We are just as plagued today by nonsense on stilts as he was.

Was it helpful to be part of The Lysicrates Prize and have the first act of The Literati performed?

It was wonderful. John and Patricia Azarias are rightly referred to in the theatre as angels. Angels make things take flight. Gale Edwards brilliantly directed twenty minutes of the play under its then title, The Savvy Women. We sat together on the lawn at the Botanic Gardens in Sydney and in Gale’s beautiful house, and had a ball shaping that section for presentation. It was also a good test of what doubling could be done to reduce the cast size and yet tell the story with all the fun and games. One of the problems with the title was that the play also deals mercilessly with a male poet, so when Griffin decided to do the play, Lee rang me just before I set off for Gallipoli and asked if I could come up with another title. So as I strode the beaches and battlefields of Anzac Cove, I made a list of possible titles and sent them to both Lee and Pete Evans. Both of them, independently, replied enthusiastically to the same title: The Literati, as it captured both the lofty ideals and the hilarious wankery.

Are you excited to be working with Bell again and Pete Evans?

Yes, very excited. John Bell has achieved a mighty accomplishment with 25 years of a national company uniquely presenting classic plays. I met Pete Evans through working on Molière and he has become a good friend and collaborator. He has expanded the fantastic repertoire of the Bell Shakespeare Company to embrace the French classics by those writers who were contemporaries or near contemporaries of Shakespeare. This is an excellent step (I would say that!) just as it has been for the Royal Shakespeare Company in England and the Shakespeare Theatre Company in Washington. Through Bell Shakespeare, I have been able to build and hone a craft for which there is no way to prepare other than being thrown in at the deep end. So trust is a huge part of that equation. I was also very impressed that the company was quite relaxed about dealing with a living writer! And who would ever have thought that a co-production would take place between a celebrated national touring company and a famously intimate theatre in King’s Cross? It is an inspired idea, and one to relish! One of the things I really enjoy is not only working on Molière, but talking about him with Pete. It’s always a wonderful conversation, whether in his office in the Rocks, or over coffee, wine or a sandwich, or in the rehearsal room. Pete has a warm, democratic manner. You know he’s in charge, but his respect for those he works with is, as the French would say, all about Liberty, Fraternity, Equality. 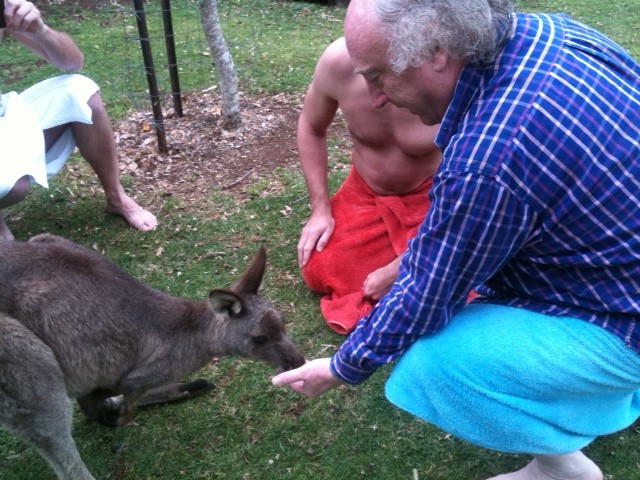 Justin hanging out with the Marsupials during down time on the School for Wives tour.

And working with Kate Mulvany again?

An ardent fan of Kate’s said to me recently that she’d heard someone describe Meryl Streep as if she is lit from within. That is also absolutely true of Kate Mulvany. I cannot think of a better compliment or truer word for this extraordinary artist. Though I must admit at first I was a bit threatened having such a bloody good writer in the rehearsal room! I need not have worried, as Kate spreads joy and light and also delivers a radiant performance. I cannot remember, in any performance of Tartuffe, including dress rehearsal and previews, where Kate missed a line. She is the polished diamond. She’s also an ensemble player, part of the team while shining in her own space. It’s a real privilege working with someone like that.

What do you think Lee Lewis will bring to the work as Director?

I first worked with Lee when the Bell Co produced my translation of Molière’s The School for Wives (L’école des Femmes) for national tour, and Pete asked Lee to direct it. Working on a play over a period of six months around and across Australia is a good test of both a professional relationship and a friendship. We survived intact – despite the fact that when I asked Lee if she’d seen any of my early work, she replied “No, Justin, I was a little girl in school then!” Lee works hard, runs a tight ship and keeps her cool, which are great and important qualities. Lee also has the warmest smile in the business. I remember worrying about the long exposition scene at the top of Wives. It is essential information before the fun and games begin in Scene Two. Lee and I went to Bar 100 in the Rocks for a martini some weeks before rehearsals started. Lee said “Well for the first half of the opening scene, the guys will be in a car being driven through Paris in the 1920s drinking Champagne, and for the second half of the scene, the car will fly off and they will be in a gorgeous little French cafe with a very persistent waiter.” She then had a sip of martini, smiled and said: “Is that okay?” Those who saw Wives will remember it as one of the most sparkling opening scenes in memory. So what Lee brings to a show is the element of surprise. She is very visual and very bold, and when she’s rehearsing a moment that is wildly audacious, she’ll say: “If the audience is with us, we’ll get away with it.” And I like that she is always thinking of the audience. So I think I am pretty damn fortunate to be working with her again on The Literati. So is Molière, by the way. 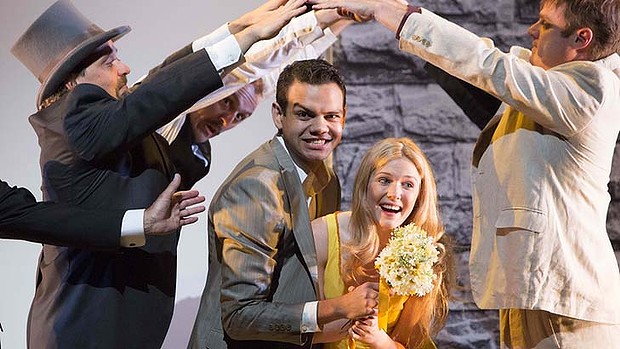 How do you think the intimacy of the Stables stage will compliment the work?

Lee knows how to use the scale of the particular venue, whether it’s the Opera House or the Stables, to its best advantage. In a way, The Literati is more intimate than Tartuffe or Wives. I deliberately adapted it for both a smaller cast and a smaller theatre, so that there could be chamber productions of the play. Of course it is wonderful to be in, say, the Opera House or the Victorian Arts Centre, but I really wanted to do a Molière that could be done more in an “apartment” than a “house”. If you actually look at the Stables Theatre, the auditorium is cosy, but the playing area is quite spacious in a way. So I think the intimacy is good for the sense that we are being let in to steal a very private peek at a very funny predicament.