Griffin’s first Main Season show for 2021 is Green Park by Elias Jamieson Brown. Completely sold out and taking place outdoors at sunset in the actual Green Park in Darlinghurst, the play is chock-full of poignant realism, taboo topics of conversation, and feelings of excitement and danger. For our ‘In Conversation’ series on the Griffin blog, Elias discusses his experiences of being a playwright living with Irlen Syndrome and Dyslexia. It’s a wonderful read that subverts expectations around what it means to be a writer. Read on!

“I tired of the very regular poor proofing of spelling and punctuation so that I began reading your play in a fairly grumpy frame of mind, was that your intention?”

I pulled this quote from a letter I received from an ultra sassy dramaturg who at the time represented a fairly reputable theatre company. I was fresh out of high school and this dramaturg had completed a “painstaking” script appraisal of my work. His letter strongly discouraged me from ever taking up pen and paper again.

“Surely the writing can’t become more dire?” He rhapsodised about poor formatting and typos, and went to great lengths to let me know that this particular appraisal had been “a chore” he could have done without. It was obvious my writing had really pissed him off.

I replied to let him know I have Irlen Syndrome and Dyslexia—which is true, but my intent was purely to make him feel guilty. I asked him to forgive the spelling mistakes and typos and asked if he had any dramaturgical feedback. He never replied.

My writing still inspires this kind of frustration sometimes. If I’m writing under pressure my punctuation can seem a little whacked. My work is graffitied with corrections when it’s returned to me. Each time this happens I’m reminded there is a common assumption that we all experience text and language the same way.

There’s a belief that printed text is static and that black letters are more dominant than the white paper beneath. Growing up, my experience of text was different. I learned that ink—no matter how steadfast—is quite capable of shapeshifting and there’s no such thing as ‘even spacing’ or uniformity of font. 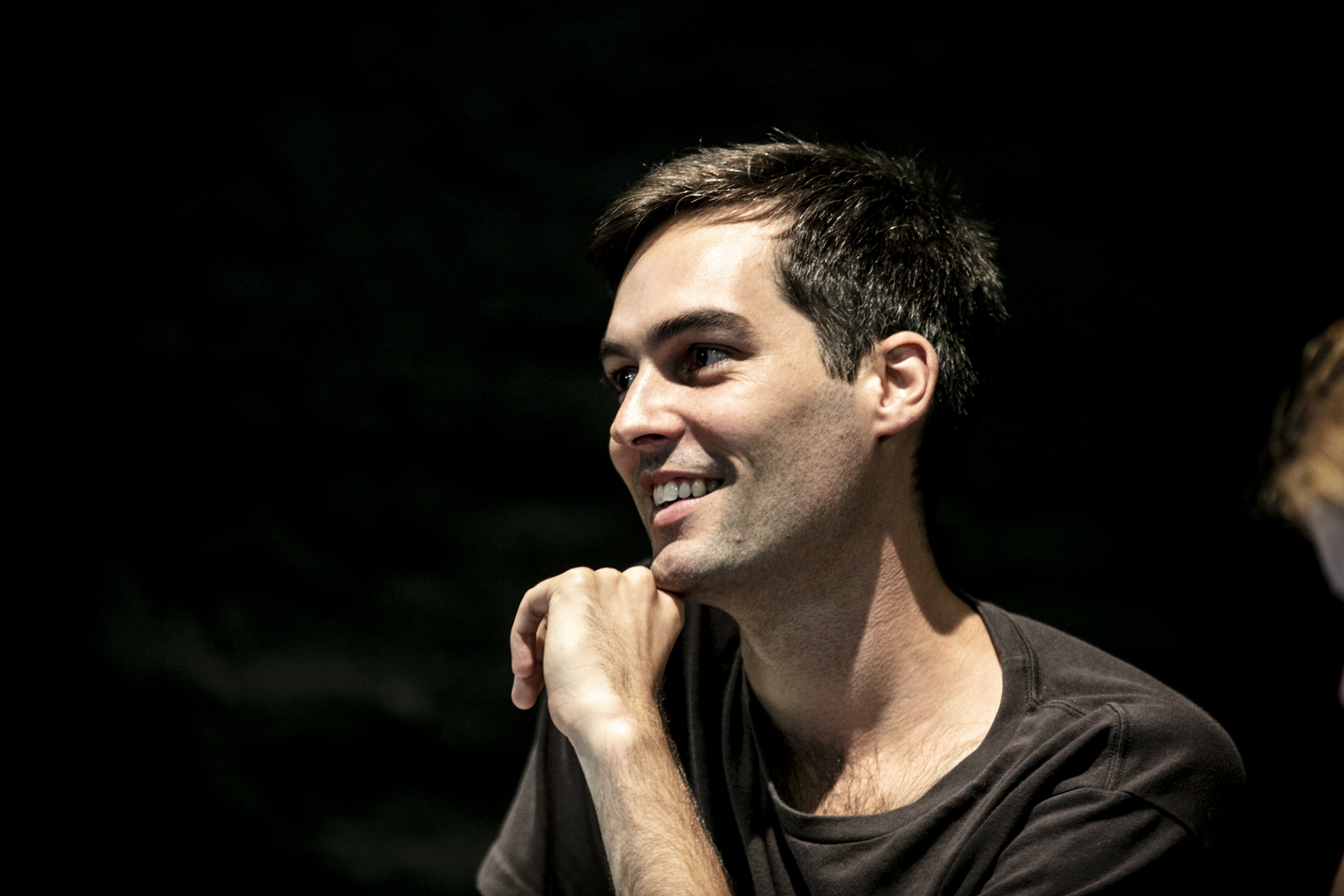 When I was younger I would experience pri nt distort ions in wh ichwo rds bro ke apa rt. I still experience this when I’m really tired or reading under fluorescent lights. If I’m working on a super-dense passage of text, the white space between words begins to course down the page like tiny white rivers.

Now that I’m older I can write, read novels, and survive in an academic environment, but my relationship to text continues to be far more visceral than intellectual. It took time, but these days, rather than a disorder, I consider my experience of text to be a strength.

During my post-grad, I spent some time learning from the playwright, Sibyl Kempson. She’s incredible—very cool, and very zany—she’s like a composite of David Lynch and Lydia Lunch. She insisted this should be a painful process. She wanted the class to break language apart and put it back together in abstract ways so an alien might understand.

In a way, Sibyl had us return to a primitive and emotional experience of text—something closer to my formative experiences of reading and writing. In these classes, I was encouraged to ignore all punctuation. I drew sentences that bent in waves, grew shadows, or circled in on themselves until they slowly ate themselves.

The whole process reminded me of something that is embarrassingly obvious but still profound. That theatre isn’t a reader’s medium. I know! Embarrassingly obvious! But this reminder allowed me to get out of my own way when it came to writing plays. I was able to quash the voice at the back of my head that said “this writing is dire”.

To some of us, the rules of grammar and punctuation are lawless, often abstract, and unreachable. So we write rubbish essays. But when it comes to dialogue, we understand that sound can be a physical object—something to be exhumed from the gut. Words can often hurt as they travel upward toward the mouth. They are often bulbous and weighty and can drop on the floor with a thud. 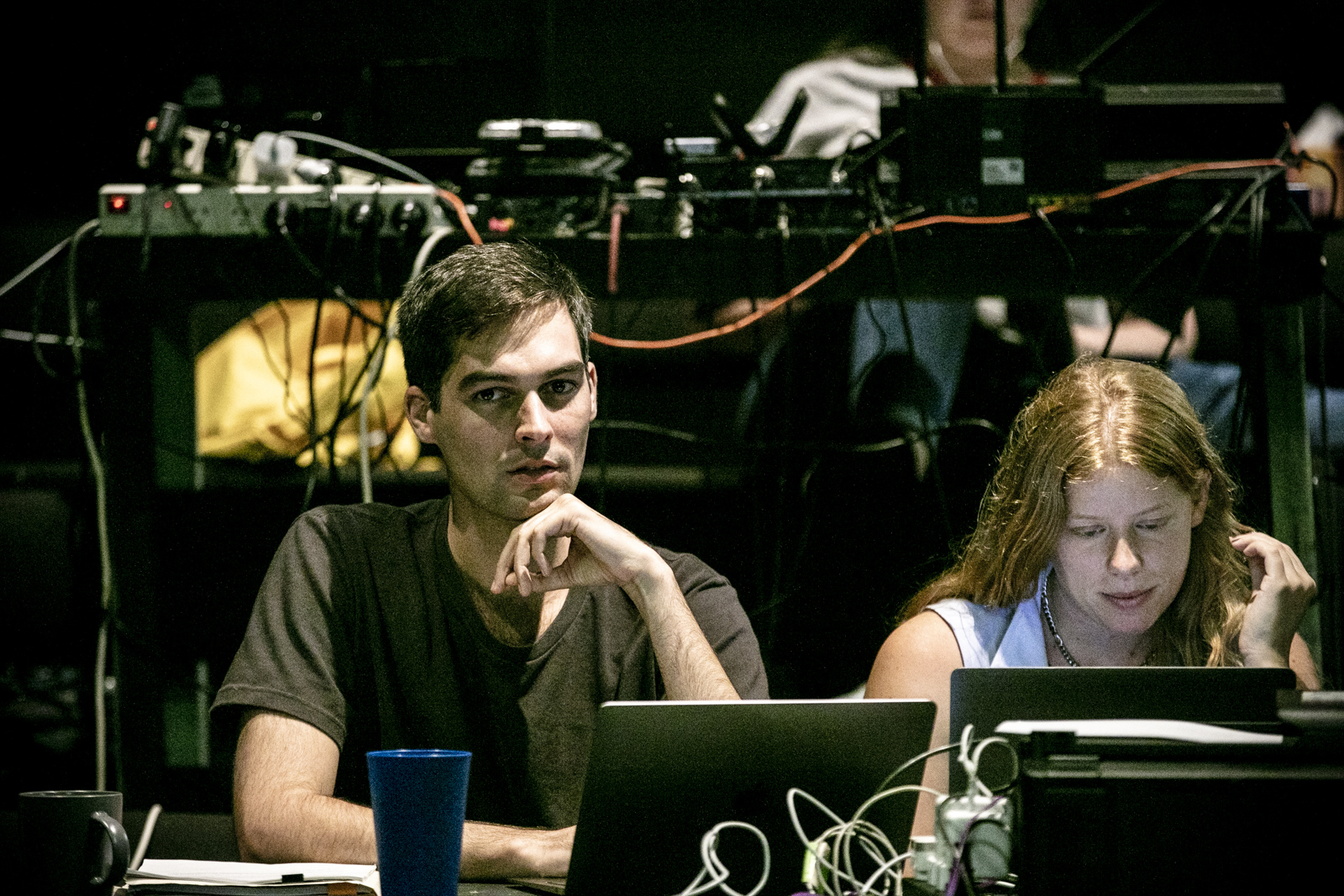 Abandoning traditional punctuation and grammar allows us to use language in other useful ways. Perfect English, for example, isn’t at all valuable when it comes to mirroring daily speech patterns. This is probably because no one speaks perfectly in the middle of an argument. In reality, we’re very rough with language and we often don’t make sense.

During my undergrad, I would take a break and stop writing when ev er I turned ti red and th e wor ds star ted  tob reak a part be cau se I wo u ld inevi ta bly ma ke d um b mista kes and lo se marks on my ess ay. Now as I’m writing plays, I’m quite happy to embrace my errors. Actors and dramaturgs are often generous and let these errors slide. But they also value writing based on its imagery, instinct and pulse rather than it’s properness—if that’s even a word…

Green Park is sold out and plays until 6 March. If you’d like to try your hand at nabbing tickets, call Griffin’s Box Office. Learn more about Elias and his work here.