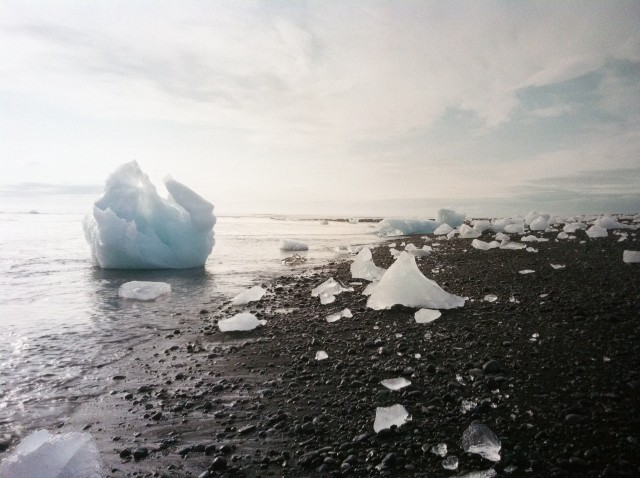 Michael Hall is New Zealand-born, Sydney-based award winning professional photographer who has been in the field for over 20 years. However, it was a near fatal cycling accident with a semi-trailer in 2007 and a life-changing period of recovery, reflection, and inspiration that strengthened his resolve to tackle one of the biggest challenges the world faces: climate change.

Here, he talks about the photograph, Jökulsárlón, Iceland, currently on display in the Griffin foyer as part of the Between Two Waves season.

Tell us where the photograph was taken and what it is.
These small deposits of ancient ice are the remnants of glacial ice which have washed up on the south coast of Iceland having made their infinitely slow journey from the Vatnajökull ice cap toward the ocean via glaciers and the ever expanding lake Jökulsárlón. The 8,100 sq km Vatnajökull icecap, which is the largest ice cap in Europe is fast retreating as the climate warms. Climate change may course all of Iceland’s glaciers to disappear by 2100 and scientists have predicted an increase in volcanic activity as the Icelandic ice sheets shift.

How does this affect climate change?
Ice caps and glaciers throughout the world are melting at an alarming rate. By the middle of the 21st century, 200 million people may be permanently displaced due to rising sea levels, heavier floods and, ironically, drought.

Never before have so many humans lived so close to the coasts: More than a hundred million people worldwide live within one meter of mean sea level. Vulnerable to sea-level rise, Tuvalu, has already begun formulating evacuation plans. Megacities where human populations have concentrated near coastal plains or river deltas; Shanghai, Bangkok, Jakarta, Tokyo, and New York are at risk. The projected economic and humanitarian impacts on low-lying, densely populated, and desperately poor countries like Bangladesh are potentially catastrophic. The scenarios are disturbing even in wealthy countries like the Netherlands, with nearly half its landmass already at or below sea level.

How has the experience inspired you and how it has changed your perspective?
This week I returned from a trip to Sumatra with my youngest son. We did manage to see some jungle and some wildlife however the overwhelming impression we where left with was of dense and ever spreading population and an unnerving imbalance of pre-pubescent children to adult population, plastic everywhere one looked and an ever present acrid smell of burning plastic one could not get away from. Eli who is now 15 years of age understands a great deal about what is lost of this world which he and his generation will never bare witness to, the loss of biodiversity, the ever increasing population of this world and the governments and corporations which are allowing this to happen. Ancient ice is just another one of these things we are losing, by the time he travels independently there may just not be that much ice left other than the ice caps north and south of the 80th parallel. Inland ice may just be a thing of the past. Through my travels (Iceland, Greenland, Svalbard) I’ve fallen in love with ice, it’s one of natures most beautiful and extraordinary things, what loss, all due to us humans…

Michael Hall’s photograph will be in the foyer for the full season of Between Two Waves.

Find out more information about the show and how to book tickets here.

BETWEEN TWO WAVES: BEHIND THE SCENES EXTRA Forum: Changing the Social Climate