Designing Across the Border: In Conversation with Renée Mulder

Renée Mulder is the incredible designer behind Griffin’s first show back after lockdown, Superheroes. Working within some pretty substantial new restrictions, Renée has allowed her creative vision to flourish amidst a change of venue, a slightly delayed season, and all from her remote working-from-home setup across the border in sunny Queensland. Renée was kind enough to offer some insight about this radically different process to the Griffin team via Zoom. We can’t wait to see the design she’s dreamed up in action, live from the Reginald Theatre at the Seymour Centre!

I’m up in Queensland at the moment.

I was here working on Triple X with Sydney Theatre Company and Queensland Theatre when the first lockdown happened. I’m from Brisbane originally, and have family up here. Then as the border situation kept changing, and work down in Sydney was constantly being either cancelled or rescheduled, I thought that it might be better to stay up in Brisbane.

Then Shari [Sebbens, Director] came to me with Superheroes for Griffin in about late May, and everything was on the go, but then borders started to close again! So, it’s kind of been a bit unprecedented… obviously that’s the word everyone’s using, but it’s weirdly set a new precedent, in the fact that as a designer you’re meant to be present in the process of rehearsal, but obviously, this process has been quite different.

The whole concept and development phase for Superheroes was quite normal. 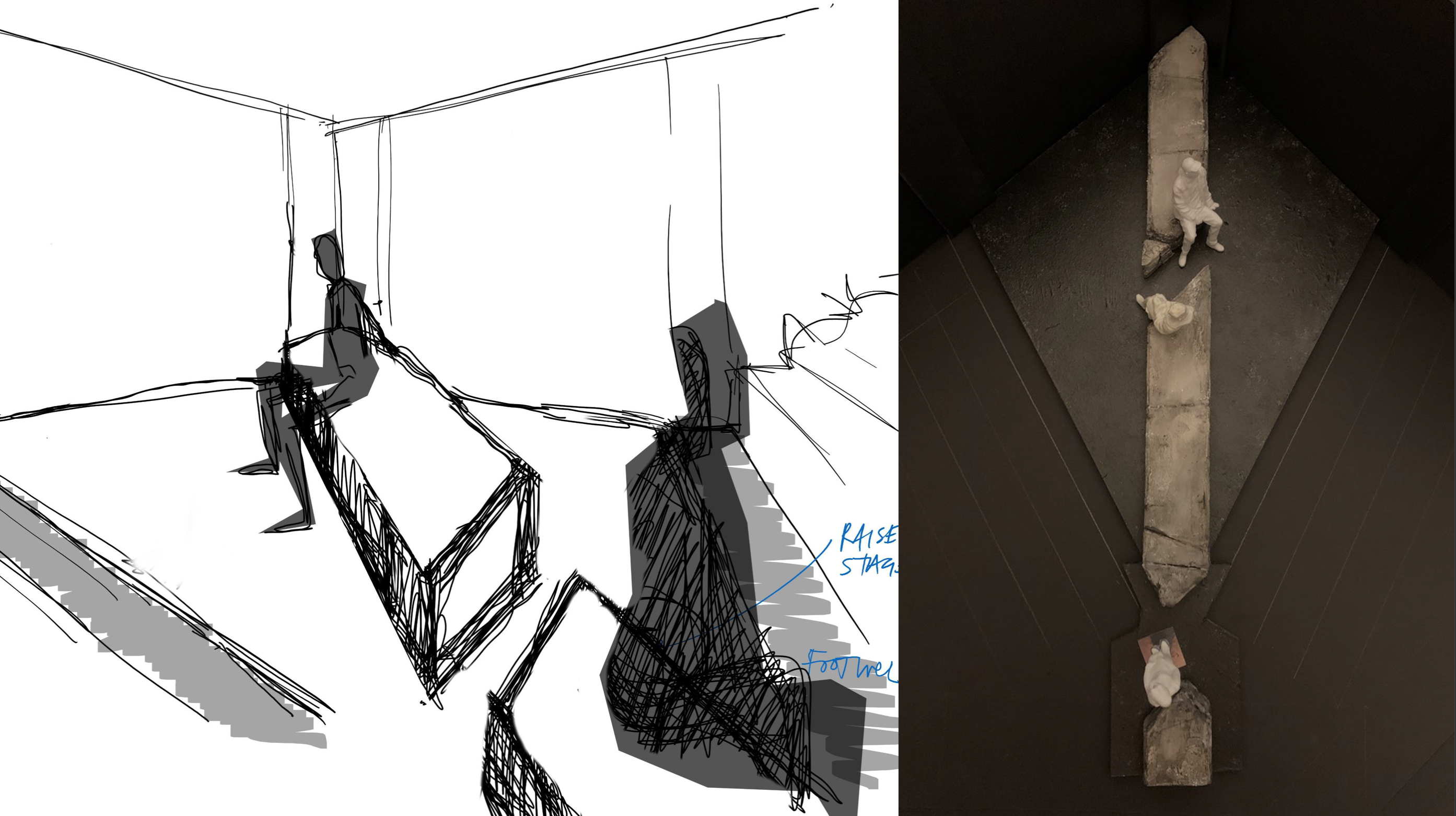 A lot of what I do as a designer in the early stages of my process is working in my home office anyway. So the original stages were pretty much the same. If anything, the face-to-face meetings just turned into phone conversations. I sort of equate it to a game of tennis, where I’ll put together some references, sketches and images, and then I’ll volley it over the net to Shari via email, then wait for her to look at it and get back to me, till she throws the ball back! It’s this to-and-fro of how ideas come together. I’ve worked like this with directors on many shows over the years. For example, when the director and I are in two different cities, working virtually is actually standard in the lead-up to rehearsing a show.

Due to the lockdown, I was engaged by Griffin relatively late in the scheme of things. No one really knew if anything was going ahead or not. It was very much a quick meeting to ask if I was interested and available, and saying “We’re just going to give this a go, whether the show goes ahead or not,” because it was all still up in the air if we were allowed to put theatre on—it must have been back in June or July. It was a very accelerated process.

Where both Shari and I were at the time, in terms of headspace, the whole concept of the show was actually quite dark, and very intimate. 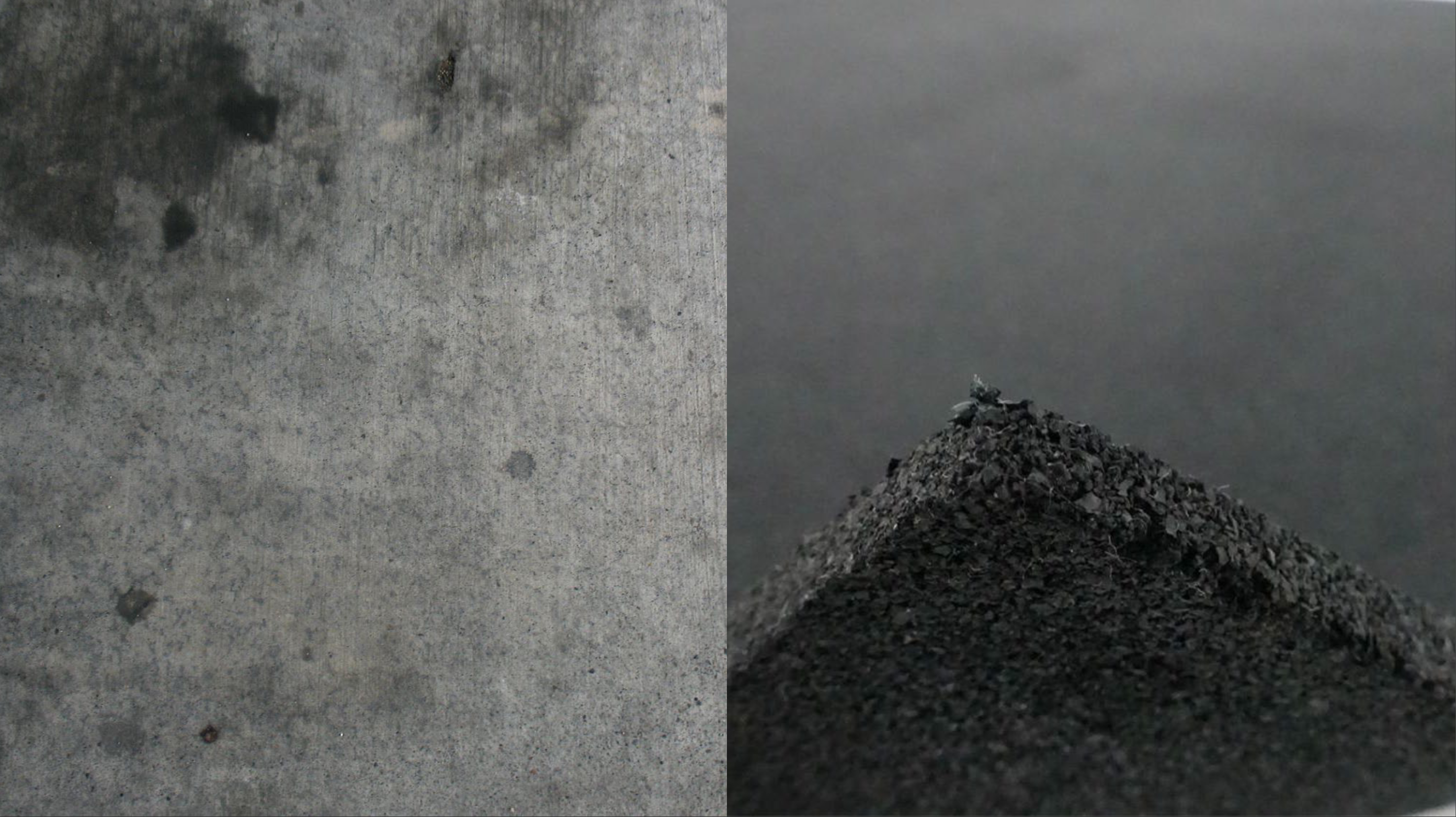 In the weeks after we presented our initial concept to Griffin, Shari had more thoughts about it, and she thought, “Actually, we probably need to brighten this up, open it up a little bit more.” Superheroes is not necessarily a bright, happy play. It’s got pretty heavy themes in it. We had isolated the space so much in our original concept that my design was all just based on sources of light—sources of light that were very much actor operated. It would be the glow of a mobile phone, or a torch light held up to the face… the lighting was so sparse and isolated in its own right, to the point where I think that that was a true reflection of where we as the creative team were in our minds, in terms of what was going on around the world, so I’m not surprised that’s what we came up with initially!

Our initial thinking was all that people will want to hear is the story; the beautiful words that Mark [Rogers, playwright] has written. The poetry in what he had written is so powerful that you don’t want to compete with that in any way, and when you’re putting that play in a space that is as intimate as Griffin, that’s all people really want: to be with people and to hear a story, almost by campfire. That was the level of storytelling we were operating at: very sparse, and deceptively simple. It means that Verity’s work [Hampson, lighting designer] and Dave’s work [Bergman, sound designer & composer] would have been really central to the rehearsal process for that concept. That’s where we landed for the first iteration—a series of incandescent light bulbs that were hanging from the ceiling, some of them could be lowered down to the floor, and a cast member could sit at that… and I think that that would have worked quite well in the Stables. But as Shari and I were realising that it was too dark, too sparse, that was when things were starting to open up again. I guess there was a little more optimism being injected back into the idea that people can go back to the theatre again.

We then started looking at different locations in the script of where the dual storylines intersected… The concept of a bitumen road, the idea of a white dashed line running down the centre of the road… I turned those kinds of shapes into platforms, or truncated tension shapes that are touching, but not quite. The idea of those sorts of shapes being abstracted into workable spaces for the cast to play in, especially with the set being in the Stables—it would cut right down the centre, down that kite shape.

That’s where we landed: these three crumbled concrete shapes which, again, gives us more of a sense of location. 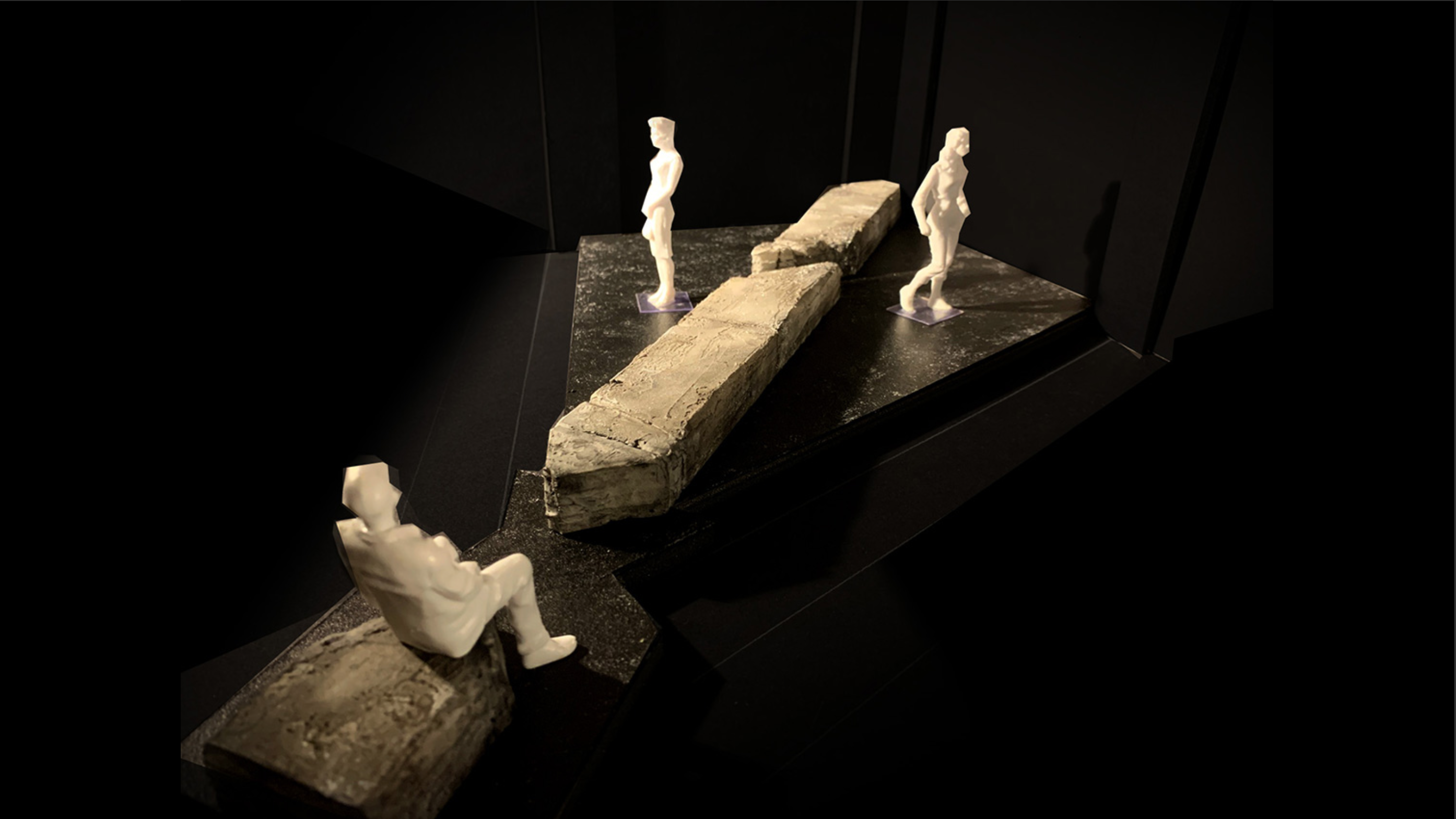 It opens up the space so we see more of the venue, and more of the space we’re in, which represents the brightness and lightness that Shari was seeking, and it also offers a sense of architecture that the cast could work around, as opposed to our old design, which would have been a really dark space with floating heads.

The change of venue from the Stables to the Seymour Centre happened really late. The venue change took place literally days before we started rehearsals! I was notified probably two days before we started rehearsals that we were changing venues, and that the show was in fact going ahead! I thought: “Ok, a whole new space…”. However, Shari and I were both really into the concept behind it, so we thought that it was still worth pursuing in the new space and seeing how the set behaves in a new environment. I think that the way the cast are going to navigate around those concrete shapes in the set will be quite different in the Reginald Theatre as opposed to the Stables. It’s just a different show! I think the intimacy of the Stables lends itself to a different kind of performance, whereas when you’re in somewhere like the Reginald, it is technically an end-on theatre (that is, the audience aren’t surrounding the stage).

We also had to think about the distancing which forms part of our COVID guidelines. It keeps our actors safe as well as the audience—we want to make sure everyone feels comfortable in that kind of space. There are guidelines to keep a distance of about four metres between the set and the first row of the audience that we have to abide by, which is challenging in itself as well, because it makes for a different kind of performance when you’re a little further away from people.

I think it was Day 2 of rehearsals, Shari called me and said that after going to the venue, it really felt like the set needed to be lifted up off the floor in that space. So Ryan, Griffin’s amazing Production Manager, was able to source some rostra from Belvoir, and now we’re able to lift the whole set up onto a platform to make it feel like it’s a little more engaged with the seating bank. The lucky thing is this set is flexible in that it’s three modules that you can position anywhere on the floor. So I’m even anticipating that by the time we get in for a technical rehearsal that the location of those shapes may be tweaked a little depending on what feels right for the performers and for Shari in that space. I feel happy that this was the set we landed on when we changed venues. It’ll be a different game in that space, I think, but we’ve just rolled with it.

In the rehearsal room, Khym [Stage Manager] and Ryan and Ally [Production Coordinator] are a brilliant team. They’ve been able to set up a webcam, which means that for all our production meetings, we hold them with Khym and Shari in the room, and the rest of the creative team Zooms in. Also, whenever there’s a run which is about to happen, Khym will schedule a Zoom meeting and we can nominate whether we want to be present to watch it via webcam, which is awesome. Khym’s also suggested setting up a webcam in the theatre, so that when we’re bumping the show in and for tech rehearsals, I can be present via Zoom. It will be a very strange experience, because usually you’re there being able to touch and handle things, so instead you’re relying on other people to be your hands or be your eyes. 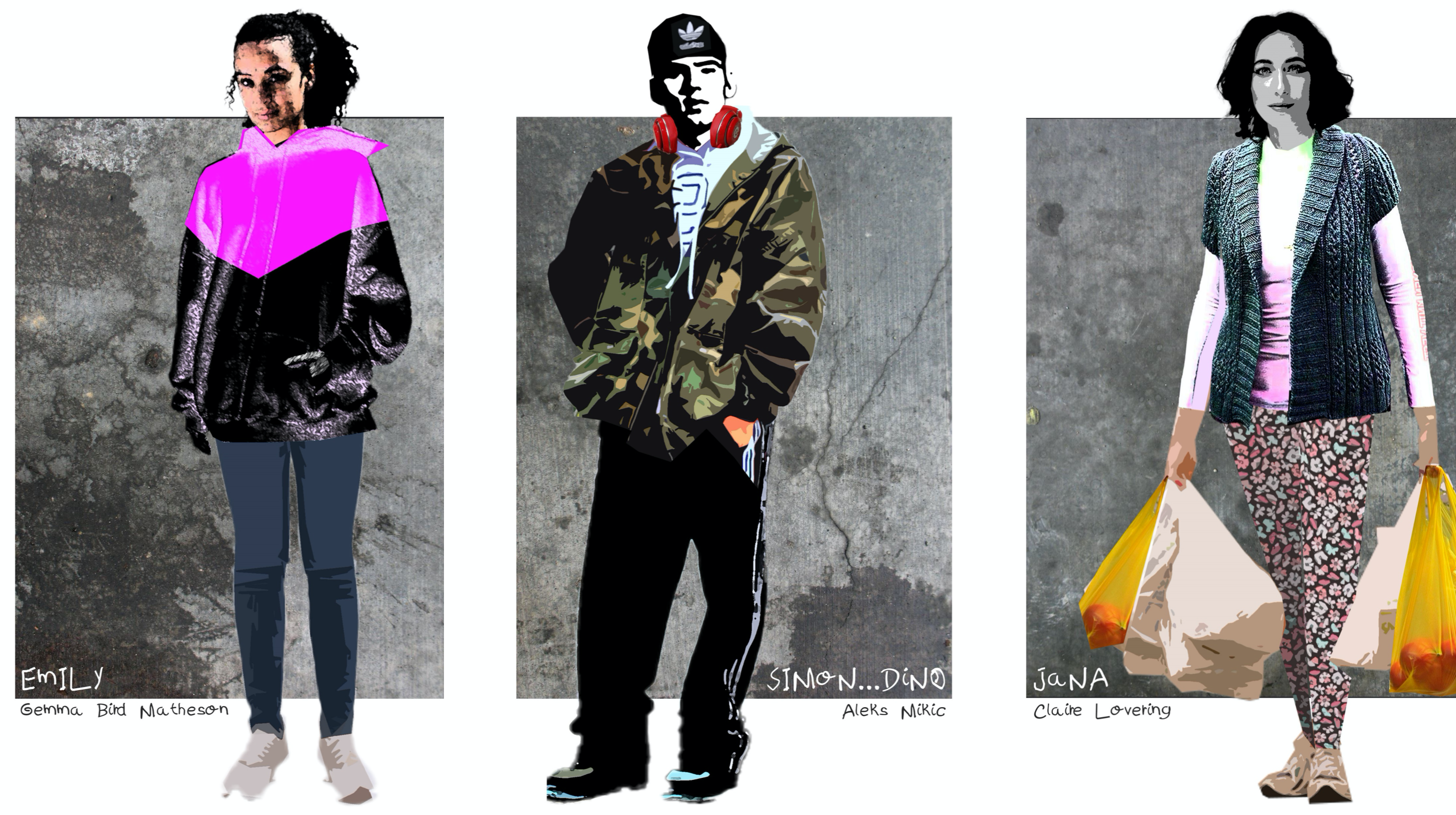 For costume sourcing for the show, we’ve done a lot of online shopping! I’ve sent many lists off to Ryan and Ally, and they’ve been amazing in ordering it all, and everything’s arrived at Griffin now, so this week we’re starting to do costume fittings via FaceTime… I’ve got my first costume fitting today so we’ll see how that goes!

Overall, I’m hoping my design will help support the cast, and Mark’s story, to make sure that the production as a whole feels very coherent and unified.

My hope is that the set doesn’t feel too out of context—it sounds weird, but I don’t want it to be a massive feature. Because the space is relatively abstract, the story goes in so many different directions, that you just need to be with the words, be with the cast, as they tell the story. Being back enjoying live theatre in itself is going to be an interesting experience, so hopefully, it’s enough that people are going to want to keep coming back to the theatre in such a challenging time.

Superheroes is playing at the Reginald Theatre, Seymour Centre, from 25 September – 24 October.