Staff Tutorials: Have a Boogie with Whitney

Just because our theatre’s dark, doesn’t mean the Griffs aren’t continuing to work hard behind the scenes! Welcome to Staff Tutorials, which will hopefully bring you some joy and creative thinking while at home.

Here on the Griffin blog, we’ll share amazing creations/stories/ideas/hobbies from our staff as we keep ourselves busy during lockdown. This week we’re featuring Whitney Richards interviewed by Marketing Assistant Rebecca Abdel-Messih. Whit talks all things dance, and why lockdown is a great time to shake your tail feather and free your body and your mind. 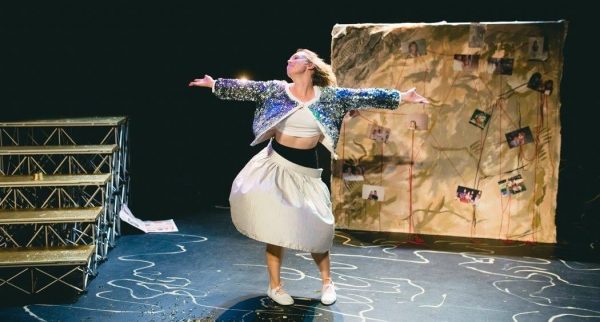 Rebecca: Thank you for joining us on the blog this week! What’s your role at Griffin?

Whitney: My name is Whitney Richards and my job title is Programs & Administration Coordinator, which means lots of different things. I basically interact with everybody at the company, and lots of people who interact with the company externally. I’m missing all of the hustle and bustle, but also grateful for some peace and quiet at the moment!

Rebecca: Definitely! My mother was saying yesterday that I should enjoy the down time that I have. You know—you don’t have to take public transport or get up early.

Whitney: Yeah, I’m really enjoying sleeping in and not being late!

Rebecca: So, tell me a bit about dance. Was it something you did from a young age?

Whitney: I grew up listening to lots of pop music. Like, my name is Whitney! My sisters and I are all named after singers, and my sisters are a bit older than me as well. So, I was quite young when I was listening to Madonna and Janet Jackson and trying to emulate their dance moves. I feel like it’s sort of in my blood. My great grandma was a vaudeville performer. I have been paid to dance in shows, but I wouldn’t say that I’m a professional dancer. I would say that people like watching me dance because I really enjoy it.

And from what I’ve been told, and what I know about myself, I can make crap dancing kind of work! I really believe that everybody can dance. I kind of believe in it not being perfect but giving into your impulse, and the music and just setting your body free.

Rebecca: Were there any particular styles you enjoyed performing?

Whitney: I grew up doing gymnastics. I grew up in a small town, so it was either gymnastics or jazz dance. And we couldn’t afford jazz dance, because you had to buy all the costumes and the shoes, and gymnastics was just the leotard.

I liked gymnastics, but I would look at my friends who were doing jazz, and I really wanted to do it. Dancing can feel exclusive or if you don’t have a certain body type, or if you can’t afford the costumes. But honestly you could dance anywhere. And I certainly am at the moment. Music for me right now is helping me get out of any negative thought patterns.

I did quite a bit of ballet when I was a teenager, because I wanted to learn the basics. It was probably the fittest I’ve ever been in my life—like, my legs were insane! Yet I still was never very good at it. And I also was a bit naughty, like chatty. I didn’t have the ballet vibe, but I really enjoyed it. And look, I’m super white, but I really love doing hip hop. I love the energy—where the energy sits and the music, I guess. 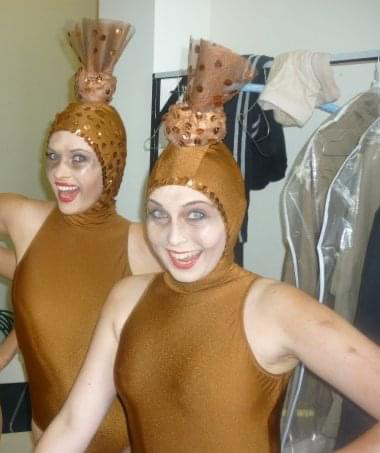 I’ve also done jazz, and I’ve done some musicals. There was one where I had to dress up as a sausage and do this sausage dance number—I had to dance as a sausage on sand which was actually really, really difficult.

Three, four years ago, I wrote a solo show about family and also finding your chosen family and, and I talked about how when I first did Rock Eisteddfod in high school, it was where I found my people. I really loved the rehearsals and the hairspray and the loud music. In that show I incorporated a lot of dance. For all the crowdfunding that I did, to thank people, I sent them videos of me dancing around my lounge room. So not really sure if that’s a gift or a punishment! I’ve even done ribbon twirling and all sorts of things!

Rebecca: Wow! That is incredible! It sounds like you’ve done a bunch of different dance over the years.

Whitney: I always come back to dance. When people ask me if I won the lottery, what would you do? Like, if you won it today, and the money was in your account, what would you do? I would love to open a space that could be a dance studio during the day and potentially some sort of venue at night. It would be about getting real. Bringing down the walls of ‘you can or can’t’ dance.

I really enjoy No Lights No Lycra. I really miss it because it’s not something you can do right now. You pay $7 or something and they usher everybody into this hall. And you think, ‘Oh, no lights, sure!’ But it’s like no lights… and they also black out the windows so you can’t see your hands in front of your face. When the music starts, it’s pretty loud, and it’s just about getting into your body without the fear of judgment from people. You know, I think that’s what holds a lot of people back from dancing. There’s the fear of looking silly or thinking you’re not good. I think if you are vibing something out and enjoying the people that are around you, then you look good. 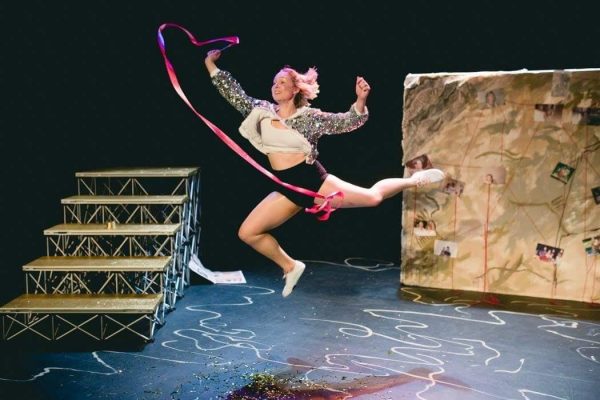 Rebecca: Dancing is literally in your blood!

Whitney: Anybody who’s ever been on tour with me or sat next to me at work or lived with me knows that I just love music. Sometimes I might have to pause a conversation to just really dance out a bit that I really enjoy in the song. I believe in spontaneously breaking into dance, or even working something through your body.

There’s this thing, I think it’s called Body Electric Dance Studios, in Melbourne. It’s basically like doing a school dance concert, but it’s for adults. It’s basically adult Rock Eisteddfod. It’s the things that I miss about being at school and getting to choreograph a dance. I used to spend my weekends just making up dances with my friends. You know, I just wish we could tap into like our childlike selves. That’s what I would hope for. However old I end up being, I hope I never lose that kind of ability to play and follow my impulses.

Rebecca: Oh that’s really nice! It makes me think, how did you fall into theatre rather than dance?

Whitney: I think a passion for movement and dance doesn’t have to be exclusive to those who enjoy live performance theatre. I loved Dogged, I loved seeing how integrated the physicality was, and how it helped convey the text that was so expansive, and almost impossible. The physicality really helped to get the story across. And you don’t always see that.

Rebecca: I agree completely. The cast were phenomenal. They really embodied the characters so well. I’ve never seen anything like it! I’ve just got one final question. Any advice for beginners? I know you’ve touched on it a bit. But do you have any advice for beginner dancers, or anyone thinking of trying out dancing, but maybe they’re afraid to?

Whitney: I went to a high school that had lots of people who were into it and we would meet up on the weekend to choreograph things. I guess not everybody has that and I know people who want to dance might not necessarily be of that age group, where it’s sort of encouraged. Now is actually a really good time to get into dance because there are so many online courses and classes that you can do and nobody can see you! 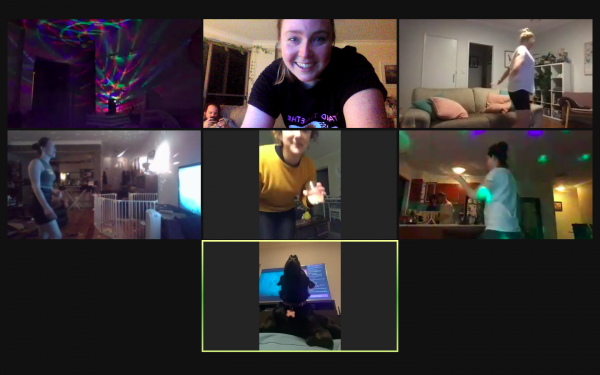 Because everybody’s pivoted online, you can try lots of different styles and get a taste of what it’s like. Nobody can see you. I really encourage people to just dance for fun as well. We’re not going to parties, we’re not in foyers, we’re not going to weddings at the moment. Tom Lowndes, the Hot Dub Time Machine guy, he does Hot Dub At Home every two weeks. I often have it on my TV and then Zoom some friends and it’s sort of the closest thing we have to being on a dance floor.

Some online dance classes I recommend are:

I guess I would encourage people to not think that a ship has sailed. If you dance, you’re a dancer, that’s it. You might not make any money out of it, but if you’ve got that feeling you should put on your favourite song as loud as your neighbours will allow, then you can set yourself free.

There’s a lot of joy in that. I think that dancing something out is absolutely therapeutic. Music can transport you to a different time or a memory or even people you can’t see at the moment. It’s really powerful. I know not everybody can afford a set of headphones. But there’s some really good headphones out there at the moment where you can totally have a dance party for one.

Use props around your house! I just grab stuff and dance with it.

Rebecca: You know, these times we’re in, growing up, it’s not something you would ever think would have happened. I mean, who would have predicted a global pandemic? But there have been many positives because I’ve felt so much more of myself being in my own space. If you just want to get up and have a little boogie, just go for it. Now’s the time to do it. It’s such a good way to make the most out of an unfortunate situation. No one’s ever sad from having a little boogie. Everyone has that one favourite song they could dance to. So just have a little shimmy!

Rebecca: Thank you so much Whit for your time and sharing with us your passion for dancing. It’s been so lovely learning about how talented our staff are!

Listen to Whitney’s Lounge Room Dance Party playlist and get your boogie on!

Stay tuned for more Staff Tutorials from all of us at Griffin! Stay safe, Grif-friends.