Just because our theatre’s dark, doesn’t mean the Griffs aren’t continuing to work hard behind the scenes! Welcome to the first of our series of Staff Tutorials, which will hopefully bring you some joy and creative thinking while at home.

Here on the Griffin blog, we’ll share amazing creations/stories/ideas/hobbies from our staff as we keep ourselves busy during lockdown. Read on to learn about data extraordinaire Peter O’Connell’s first time creating a delicious Japanese staple, okonomiyaki, interviewed by Marketing Assistant Rebecca Abdel-Messih. Recipe at the end!

Rebecca: Hi Peter! What do you do at Griffin?

Peter: I’m the Strategic Insights Consultant at Griffin, which means that I look at data and try and make sense of it. Turn it into information and then hopefully knowledge.

Rebecca: Okay—how do you pronounce the dish?

Peter: It’s an easy one because it’s a Japanese word—you just break it up into equally stressed syllables. So it’s Oko-nomi-yaki.

Rebecca: What it okonomiyaki exactly? I’m not sure if I’ve heard of it before!

Peter: It’s basically a cabbage pancake and the word ‘yaki’ means cooked and ‘okonomo’ just means whatever it is you like to eat! It’s a bit of a free for all and at the heart of it, it really is just a simple egg and flour batter with shredded cabbage. Then you just put in all this other stuff. It’s a quick and easy snack. It’s simple and cheap, and add whatever you like as you go, whatever you enjoy eating. You then flip it over. It’s meant to be just enough batter to hold the cabbage together. It’s not like a frittata, it’s a lot less eggy and a lot less batter-y.

Rebecca: So for example if I wanted to add chicken, I would put that in the batter and not when the pancake’s cooked and then I’d add the chicken on top? It’s not like a wrap or anything, right?

Peter: It’s a bit like making a cake. Generally, you make the batter, chop up the cabbage, then mix the add-ins into the cabbage. In this instance, that’s when you’d add the chicken. You can use ginger, chopped bacon, mushrooms, prawns, octopus… stuff like that. You mix it in with the cabbage, which is the dry component. Then you’d add the wet component which is the batter and spoon it into a circle. You don’t even pat it down at this stage, you just let it sit. Then when you flip it over, you squish it down, poke some holes in it to let the steam out and away you go! Adam Liaw‘s got this classic one where he also puts some cheese on the top as he’s going as well. You can do anything with it really. 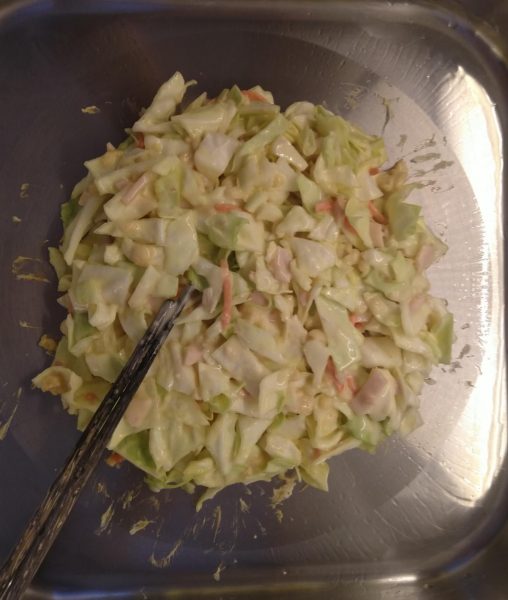 Rebecca: It seems simple enough! It sounds like a great base where you really can customise it and add in whatever you like! It kind of reminds me of an omelette! How did you come across this recipe?

Peter: It’s actually a pretty common street food in Osaka in Japan. So it’s one of those fast snacks that people have. There are two dishes that both come from Osaka; one’s called takoyaki and they’re octopus balls. The other one is okonomiyaki. They’re really commonly available, healthy snacks that you get at cafes. They’re hot, fulfilling savoury dishes that are really easy to eat.

Rebecca: Have you travelled to Japan before? I’ve never been but really want to!

Rebecca: Oh nice! So is it a dish you’ve had quite often there?

Peter: Only in the last little while. I first went there in 2016 then went back in 2017 and in 2019. I was hoping to go back last year before everything got hectic with the Olympics. I wanted to go before the event started. But that kind of went to hell in a hand basket!

Rebecca: Fair enough! What has been the highlight of creating the dish?

Peter: Well, it was the first time I had a go at making it, which was enjoyable, and I was also very pleased with the results.

Rebecca: That’s so good to hear! If you want to create this dish again, would you change anything? ‘I should have added a bit more of this’ or ‘maybe I should have left it longer’? 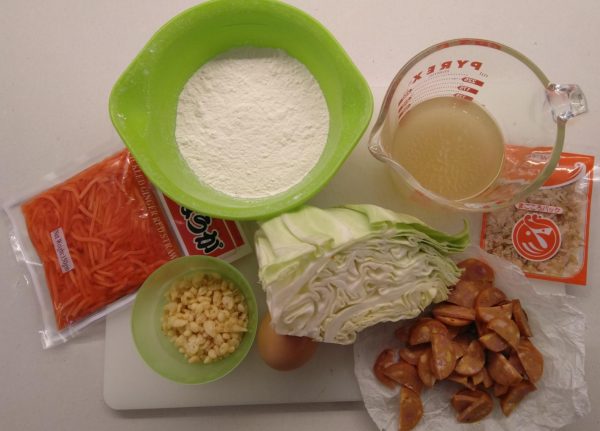 Peter: Hmm… well, the special thing—almost like a meat pie—the best thing about okonomiyaki is the sauce. So you put Kewpie mayonnaise and then this special Japanese barbecue sauce on the top.

Peter: The first time around I didn’t put a lot of sauce on there and so when we had a second one, I really got into it with the sauce and the mayonnaise. Then I put a big sprinkle of ginger which was just *chef’s kiss*. It’s all about the fix-ins. As you can imagine, a cabbage pancake is not that exciting!

Rebecca: That’s true. I love saucy dishes and I absolutely love Kewpie mayo. I can have it on anything.

Peter: I think it’s the work of the devil, whatever’s in it. It tastes fabulous!

Rebecca: It is amazing! We’re a little Aussie with it at home. Mum makes hamburgers and we just put Kewpie mayo with tomato sauce on our burgers. We use it whenever we can because it’s so tasty.

Peter: It is probably best not to read the ingredient list. Just be ignorant about what’s in it and just enjoy it! Which was great about the okonomiyaki. 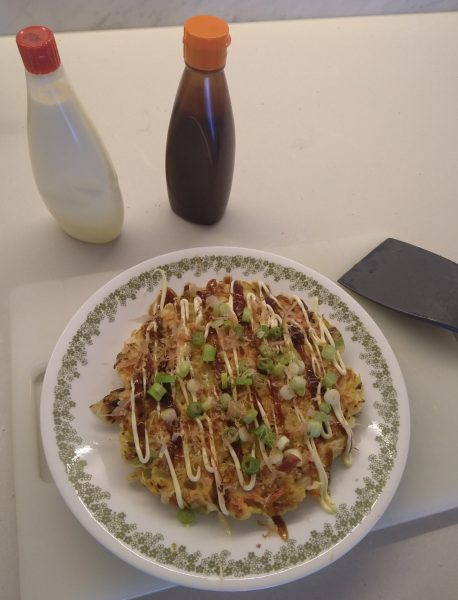 Rebecca: So, do you have a recipe for the okonomiyaki that you followed?

Peter: Okonomiyaki is a fairly simple dish. It’s a cup of flour, a cup of stock, two eggs and then 400g of cabbage. I never write things down and the classic thing that happened with this, because it was my first time creating it at home, is that I always look at two or three other recipes and comes out to be this hybrid of these recipes.  It was a blend of Adam Liaw‘s and the Just One Cookbook website.

Rebecca: Thank you for sharing that Peter! If you would like to recreate okonomiyaki, keep reading for the recipe. Make sure to tag us (@griffintheatre) and show us your creations!

Cover and refrigerate batter for at least half an hour.

Mix the fillings gently (to avoid activating the flour gluten) through the batter until they are lightly coated. It may appear that there’s not a lot of batter (which there shouldn’t be) in the mix. The idea is to just barely hold the ingredients together.

Heat lightly oiled frypan (preferably one that has a lid)—pan needs to be hot.

Gently ladle the mix into the hot pan, little by little, spreading it lightly into a rough circle (approx. 17cm in diameter).

Continue making small additions of the mix, lightly spreading it each time, until the pancake is about 2cm thick. This will use one half of the batter.

Don’t press down on the pancake yet—simply leave it loosely piled up.

Tidy the edges of the circle up with an egg lift and then cover the pan.

Check the pancake after 5 mins, adjust the heat, and allow to cook another 5 mins.

Once the pancake is firm enough to lift without it breaking flip it over (using 2 egg lifts makes this easier).

Use the egg lift to press the pancake down, tidying the edges as necessary.

Poke a few holes in the cooked top of the pancake to let out the steam.

Cover and cook for another 5 to 10 mins, adjusting heat as necessary, until done.

Transfer cooked pancake to a serving plate and then layer up the second half of the batter as before.

Garnish the top with:

Suitable to refrigerate (or freeze) – ungarnished.