SOMETHING FISHY GOING ON: THE NEW ELECTRIC BALLROOM

Breda and Clara are a generation older than Ada, who is now near the age of forty. They convince Ada that the world outside is so cruel that it should only be experienced indirectly.

Similar to The Walworth Farce, in which a father and his two sons re-enact threads of the family’s history, Breda and Clara slip into high-heels and twirl about in their full circle skirts to recount to Ada their ‘once upon a time’ at the new Electric Ballroom. At the local dance the sparkly suited lead singer seduced all listening with his velvet voice and looks that offered more. Adolescent Breda and Clara with wild imaginations and yearnings for experience followed their hearts. Something happened. The women at the cannery caught wind. Then the gossip began, the talk spilling out into the streets. The words were venomous, forever paralyzing the lives of Breda and Clara – and, in turn, the life of Ada as well.

Unlike other Irish plays there are no pints, no apparitions, and no mention of fleeing Ireland for less claustrophobic (but less green) pastures. But what we do have is a school of large Atlantic fish. A fourth character, Patsy the fish monger and link to the outside world for the women, arrives with the tides and tubs of fish. The solution to the fish is to make props and because the audience are so close to the action of the play this requires real skill and attention to detail in creating these animals. Our talented props maker Heidi Lincoln has risen to the challenge and is making a batch of individualised fish – they look so cheeky I think we’ll have to give them names. 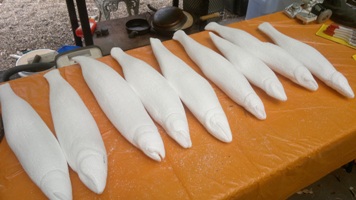 We also use a coffee cake and a mountain of biscuits each night – messy fun at the Stables Theatre!