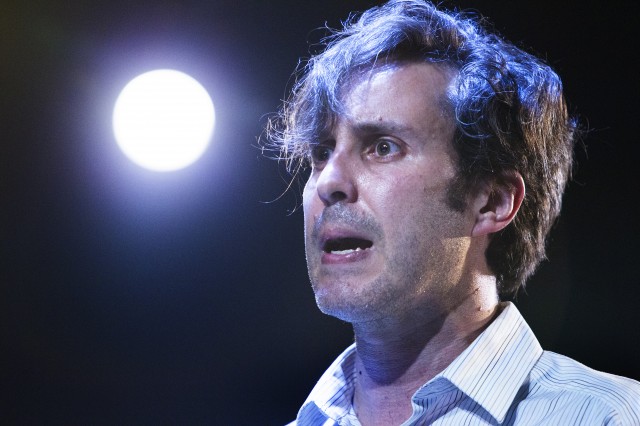 Corey McMahon bring us his directorial perspective on Rust and Bone in this companion piece to the essay posted last week from Caleb Lewis.

Working on this production of Rust and Bone is the culmination of a four-year association with the play. It began in late 2009, when playwright Caleb Lewis and I met to discuss the idea of collaborating on a new play. He mentioned Rust and Bone and sent me the early draft.

In 2010, we embarked on a major development in Adelaide in association with the Adelaide Festival Centre. It was a luxurious three-week development. We took a draft closely aligned to the source text and began pulling it apart, cutting, refining and testing it, with the goal of developing a performance language for the piece. We wanted to answer some of the big questions one must face when in the early stages of working on a new play. How would we make these three narrative strands live on stage? How can we take what are essentially monologues and refine them to become more active and less descriptive? How can we bring characters to life and have them live through the other actors on stage? And how will those actors differentiate each character so that the physical, vocal and emotional choices they make will be instantly recognizable to the audience? And finally, what changes do we need to make to bring a sense of place to the play, ensuring the integrity of each world is maintained, but so that each sat comfortably in the Australian idiom?

The outcome of the development moved the play on significantly. Not only were characters beginning to take form, we had stripped back the more descriptive aspects of the play and found ways to make it active and to live on stage. We developed a sense of place for the play, relocating the world of the play to Queensland, and changing the language of the characters to match their new location.

It was a dramatic leap forward. The resulting draft was heading in the right direction, but we knew there was more to do. The development in Adelaide focused broadly on structure, form and character. The next phase, at the 2011 National Play Festival, would be forensic and involved rigorous testing of the next draft. The form of the play came under intense scrutiny. It worked in essence but what we tested in Adelaide now needed to be taken to the next level. Switches between time, place and character had to be performed with precision and at a lightening speed. And did the characters read? With often only a couple of lines to communicate a character, how could we do so and ensure they were real people and not caricatures? After all, there are almost 30 characters in the play, and with only three actors to create them, the play demanded detail, clarity and pace. But was the text in a place to allow for this?

We sought out opportunities to take descriptive passages and make them active. Rather than telling the audience, could we find a way of showing them? And did each of the main characters have their own, distinctive voice? Did they speak for themselves? Did they drive the play on their own terms? This sort of detailed excavation and testing of the text meant that by the end of the festival, Rust and Bone was very, very close to a draft that was ready for the rehearsal room.

For a detailed examination of how Caleb adapted the play, see his Griffin blog  (part 1 here and part 2 here).

And so on to the world premiere of Rust and Bone at Griffin Theatre, as part of the Independent season.

In developing a strategy for the rehearsal of Rust and Bone, I soon realized that the play was going to require a different approach to the one used in development. I had the benefit of knowing the play intimately. Caleb and I, along with the assistance of some very talented actors and Sam Strong’s expert dramaturgical advice created a robust rehearsal draft that had been rigorously tested. How the play would work on stage was no longer the question. The destination was clear. The journey was a different matter altogether.

It may sound odd, but I had only ever seen the play on the floor with actors carrying scripts in their hands! Suddenly the performance outcome of the moved readings seemed so inadequate. My usual approach when directing a play is to leave the blocking until very late in the rehearsal process. I like to mine the text for the raw materials required to make each moment work and gradually move towards detailing those moments. Ideally, blocking comes from that explorative process and from the actors. I know some directors block their plays straight away, but for me, it’s about creating a space where the actors can explore the text, their character and the world we are creating.

However, the process employed when rehearsing Rust and Bone was the antithesis of this. We mapped out every moment of the play on the floor first. I knew there was no way the actors would feel secure exploring the often complex, sub-textual demands of Caleb’s play if they didn’t know where they were and where they were heading next! With each actor having to switch between worlds, character and (in the case of Sam Smith who plays Eddie) time, every choice had a knock-on effect to the next moment. The choices made in one scene (which could be as brief as a single line) had to also serve the next, or if required, allow us to return to a previous moment.

It’s a bit like walking through a maze. Stray too far ahead and we would find ourselves having to unravel the blocking and start again. So a gradual process of sketching out the footprint of the play commenced. We would try something, if it worked, hang onto it, and then we’d repeat it. And then build on each moment with the next. And repeat that. Like dancers, the actors developed a muscle memory of the blocking, treating it like choreography.

Which, in a sense, the play is. It moves like a dance.

Once the play had been mapped, the process of delving into the detailed work on character began. For the actors, this often meant working technically, making clear and precise choices to create characters that were easily recognizable to the audience. Often all an actor had was a single line to give the audience a snapshot of who the person was, their relationship to Ben, James or Eddie and the world of the play in general.

For those who have seen the play, you’ll know what a technical challenge it is for each actor and what a joy it is to watch these very talented artists at the top of their game.

Rehearsals were a process of build and consolidate. Repeating over and over the dance-like choreography, refining and detailing transitions between characters. As if that wasn’t enough for the cast to navigate, every moment had to be crystal clear. The play had to make emotional sense to the audience, as much as anything else. For all its masculinity and darkness, Rust and Bone has, at its core, a huge heart. We are witness to three incredibly powerful, moving and very human stories. But it would all be for nothing if we weren’t constantly reminding ourselves that we couldn’t leave the audience behind.

Rust and Bone is played on a sparse, concrete-like platform, complete with a shallow pit that serves as the Sea World pool, the dog fighting pen and the boxing ring. There are no props, no items of furniture. It’s the purest form of storytelling. The words, the body and the imagination are the primary tools employed to engage the audience. It’s a wonderfully simple and clean design by Michael Hankin that frames the action but lets the actors do what they do best.

And so after four challenging weeks, full of joy, frustration, a lot of laughs and the creation of some fantastic moments on the stage, Rust and Bone has opened at Griffin. After many years of adapting, writing, development, testing and re-writing, this complex yet beautifully simple play is up and running. It’s a testament to Caleb’s skill and talent as a playwright and the talents of some wonderful actors, both in development and in production, who have brought these characters to life and helped us craft the play now on stage.