ADAPTING FOR THE STAGE BY CALEB LEWIS, PART 2 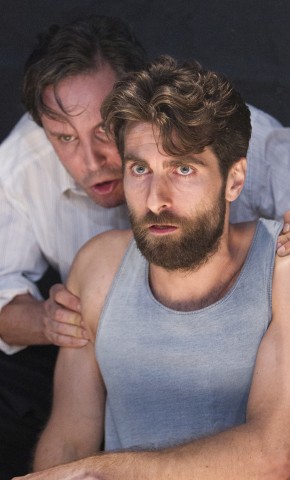 Last week we brought you the first part of playwright Caleb Lewis’s essay on adapting work for the stage. You can catch Caleb’s latest play Rust and Bone adapted from the short stories by Craig Davidson, at Griffin until 2 February.

Here is part 2 of the essay entitled ‘Apdapting for the Stage’.

This next example involves a rethink of the story to suit my setting of it here in Australia and also to add greater dramatic irony for this storyline’s conclusion.

‘I was born Eddie Brown, Jnr., on July 16, 1966, in San Bernadino, a hard-scrabble town ten miles north of the TexMex border. My father, a Border Patrol agent, worked the international fence-line, running from McAllen to Brownsville and up around the horn to the Padre Island chain off the coast. On a clear July day you’d see illegal’s sunning their lean bodies on the headlands, soaking up heat like seals before embarking on a twilight
crossing. He met his wife-to-be on a cool September evening when her raft – uneven lengths of peachwood lashed together with twine, a plastic milk jug skirt – butted the prow of his patrolling johnboat.

“It was cold, wind blowing off the Gulf,” my mother once told me. “Mio Dios. The raft seem okay when I go but the twine is breaking and those jugs fill with water. Those waters swimming with tiger sharks plump as hens. I’m thinking why I leave Cuidad Miguel – was that so terrible? But I wanted the land of opportunity.” An ironic gesture: shoulders shrugged, eyes rolled heavenwards. “I almost made it, yeah?”

The details of that boat ride were never revealed, so I’ll never know whether love blossomed or a sober deal was struck. I can picture my mother wrapped in an emergency blanket, sitting beside my father as he worked the handthrottle on an old Evinrude, the glow of a harvest moon touching the soft curve of her cheek. Maybe something stirred. But I can also picture a hushed negotiation as the lay anchored at the Government dock, maiden’s hair slapping the pilings and jaundiced light spilling between the bars of the holding cell beyond. She was a classic Latin beauty; raven hair and polished umber skin. Many border guards took Mexican wives; the paperwork wasn’t difficult to push through. My sister was born that year. Three years later, me.’

Now compare to this wholly new text below. It killed me to lose some of Davidson’s beautiful descriptions but the writing must serve the story and the writing above didn’t serve the version of the story I wanted to tell. The revised text grounds the play here in Australia and seeds Eddie’s total unfamiliarity with winter and ice, which will have tragic consequences later.

Example 2: Play Text
(adapted by me)

‘I grew up in Cloncurry – hottest place on Earth. Town still holds the record for the highest temperature: 53 degrees. Cloncurry’s a mining town. Blokes’d knock off work, head straight to the pub – nothing else to do – until Bell’s came to town.

Every October the truck would rumble down Main Street and set up on the footy oval. Roy Bell’s Boxing Tent. For a few nights in Spring, a bloke had a chance to forget his own worries and step inside the ring with Lightning Jimmy Jones or Cowboy Taylor. He might cop a shiner or a scuff on the cheek but so what? He stood tall in front of his mates, his wife, the whole bloody town.

I saw Dad fight back in ’81. I watched him go three rounds with the Cowboy. He lost but that didn’t matter. The crowd roared; Dad stood there grinning like a kid.’

In adapting Rust and Bone I saw a way to bring three of Craig Davidson’s short stories to the stage, an attempt to capture some of their power and give it new form. His writing blew me away and I thought long and hard on a way to bring it to the stage. I imagined a symphony: three voices, speaking at first in isolation, then alternately, then finally converging. The original stories and the play are similar but also vastly different. Prose and play share DNA but exist as separate entities. In fact there is a second adaptation of the same stories coming in March. A film starring Marion Cotillard, directed by Jacques Audiard (Director of The Beat My Heart Skipped). It will be interesting to see the approach he made to the same prose and see what different choices he made to my own. In the meantime please come along to Griffin and compare for yourself.