The support our Grif-family gives us is five stars (★★★★★)! Just one of our superstar supporters is the effervescent Gil Appleton, who supports Griffin Studio, one of our flagship artist development program. This End of Financial Year, we chatted to Gil about her love of new Australian stories, and why she’s so passionate about supporting Griffin. 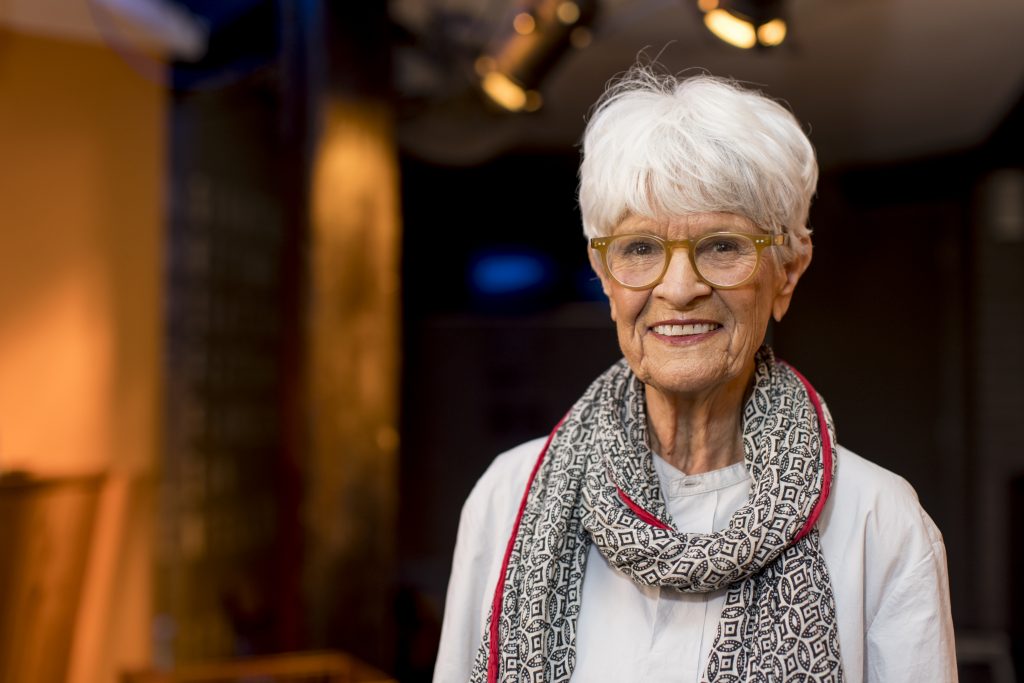 1. Tell us a little about yourself and your history with Griffin Theatre Company! What was the first Griffin show you saw?  How long have you been a supporter of Griffin?
I am a lifelong theatre lover. My father worked in the theatre and I grew up knowing many actors. I was taken to pantomimes and variety shows from the age of about four or five. I’ve always loved the company of theatre people, especially the gossip. I have been attending what is now the Stables Theatre since the first days of Nimrod  (I was at uni with the three founders). I started coming to Griffin shows during the Ros Horin era and regularly since Sam Strong was Artistic Director. I wanted to support a small company doing interesting work. I’d need to see a list to recall what was the first Griffin show I saw. Silent Disco? Mr Bailey’s Minder? Too many…

2. Who do you like to share your experiences at Griffin with? Do you bring friends, family, a loved one, or all of the above?
I attend with one of the younger members of my family to encourage them to enjoy and patronise theatre, and with close friends who share my love of theatre.

3. Do you have a favourite theatre memory at the SBW Stables Theatre?
An early revelation for me was Silent Disco, a stunning play about contemporary young people. I have to mention The Bleeding Tree—a wonderful, poetic, confronting play (and I gave support so that it could be produced). It was great that Griffin revived Diving for Pearls, an Australian classic. And there have been many excellent new works by Griffin-connected playwrights: Meyne Wyatt’s City of Gold was exceptional. I loved the Shorts seasons. The re-opening of the bar area after renovations was a great occasion, and there have been many memorable nights in the foyer. The street party was a fun innovation.

4. Why do you love theatre, and in particular, new Australian theatre?
As I mentioned earlier, my father who was a ‘producer’, as directors used to be called, and later was in charge of young people’s programs at the ABC. He was absolutely passionate about Australian plays and took me to many shows at the old Elizabethan Theatre such as Summer of the Seventeenth Doll and other plays which began a renaissance and new flush of Australian theatre from the 1950s. I went to all the Australian shows at the Old Tote and Jane St Theatres, and I still go to Belvoir and STC when they do Australian work, as well as smaller companies like Darlinghurst, Urban Theatre Projects and the Old Fitz. Griffin has proved that you can concentrate on Australian work and maintain audience appeal and high standards.

5. Why do you think it’s so important to support new Australian stories through Griffin Theatre Company?
Because it’s vital that we hear our own voices on the stage. When I was growing up, most theatre was second-rate imports from the UK, and until recently, TV—especially commercial TV—was a wasteland for Australian content. Theatre plays a vital role in Australian culture by developing and employing talented younger, as well as established, theatre workers. Theatre at its best can show Australia as it really is, and can have a positive influence on other companies and other arts mediums.

If you, like Gil, are passionate about bringing new Australian writing to the stage, consider supporting Griffin. More than ever, Griffin needs your star power to keep our stories shining.