In the Studio: Heather Grace Jones and Catherine Fargher 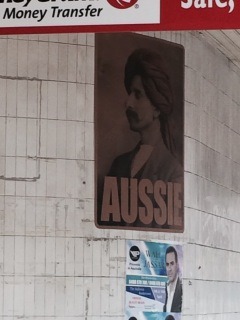 Catherine Fargher is a writer who has worked in theatre, contemporary performance and cabaret, community and youth theatre, radio, and most recently puppetry and visual theatre (2011 AWGIE award winning Dr Egg and The Man With No Ear (Opera House Kids at the Studio program, 2007 and tours of Canada and US 2008-2011), leading to a multi-platform kids work the Dr Egg Adventures.

Heather Grace Jones has ten years experience working in Afghanistan and Pakistan for an International NGO as a media writer and trainer, and currently works in Sydney. She has a doctorate in Creative writing and communications from UTS and previously worked as a producer and journalist for ABC Radio national and JJJ.

The project they are developing for Griffin Studio, Springtime in Kabul, aims to examine the many layers that exist within international conflict – the personal and the political; the ongoing effects on communities and individuals of Western involvement in Middle Eastern conflict. Afghan women and refugees, Australian soldiers, mothers with sons, and a future that increasingly involves war. Springtime in Kabul will be developed with the input of Afghan refugee writers and mothers who were involved in the ongoing conflict in Afghanistan, with a focus on the experience of women and children. It will explore both the personal and the political effects of the Australian governments’ choice to send soldiers and peacekeeping forces to international conflicts. It also examines the lives of those working behind the lines such as aid, media and NGO workers, with families in Afghanistan and back in Australia. And on their children. This will be an age-old story, as well as a contemporary one. A story about sons, the war, and the future.

It’s late at night and I’m on the balcony of the labour ward at the Randwick Royal Women’s Hospital. It’s dark. Babies are often born at night. Come by moonlight. It’s always been that way. Maybe it’s safer under cover of darkness. After my labour I step outside just for a minute to look at the night, nothing in my head except the remains of the epidural, some champagne and chocolate cake.

Two nurses are out there taking a quick puff on a ciggie. ‘They’ve started bombing in Afghanistan’, I overhear them say. I register the news with shock, though I’m too tired to join in. They finish their ciggies and go. The sound grab and images filed away with all the others from that day and night.

Later on the TV I hear it, ‘The war on terror has been declared’, as inside the women wander the hospital corridors and swap stories of their labor wounds, holding bellies with Caesar scars and drips for the pints of blood lost.

Gracie and I had our babies as the war begun. The twin towers fell, the bombing began, as they suckled and grew.

Gracie and I parented on different sides of the country, meeting up every now and then and when my son was four I heard she was taking up a job in Kabul, and Tadhg, her son was going with her. When the first emails started coming through, there was a poetry to them. ‘Springtime has come to Kabul. Spring is the time when the country emerges from a freezing cold winter and the thaw brings beauty to the capital in the form of almond blossoms and clear blue skies. And the fighting starts again.’

I follow our son’s journeys – both born in times of war. Oliver is playing Auskick AFL for the Moore Park Tigers. Tadhg is playing soccer in the International School in Kabul. Later I catch up with Gracie at the Mardi Gras parade. It’s 2011, Australia is withdrawing troops. ‘What’s going to happen now?’ I ask her. ‘I don’t know, I don’t think that we should withdraw from Afghanistan. I think now we’ve started this we have a responsibility to the women and children. They’ll be fucked if we pull out now.’

The snippets of conversation, the soundgrabs, the images, emails and occasional news clippings; all I can grasp hold of in the busy life of a working mum. I start to build a picture of the world into which we are bringing our boys, and I want to tell this story with Heather Grace: of War and mothers, sons and soldiers, children, struggle and humanity.

When I first went to South Asia I had very little understanding of what it meant to live in a conflict zone.  We lionize war in our peaceful homes – watch zombies, and soldiers, vampires and serial killers and imagine blood spilling without consequence.  Red fills our screens; we hack and hatchet, bite and bullet, wear camo to go shopping and talk about peace over cocktails.  But living with conflict is not a game it’s possible to shrug on and off with the flick of a switch.  It’s not the Walking Dead or Call of Duty 107. That baby on the beach is yours. She likes strawberries and white rice.  She laughs at monkeys. Conflict is not knowing if your kids are safe at school, or on the bus, or at the shopping centre, its hearing the sound of a blast, the thudding of a bomb that rushes through your arteries quicker than any hit of meth and wondering if that’s your baby whose arms have been blown off.  It’s traveling in the back seat of the bus and knowing the man on the bicycle next to you might hurt you, hurt the ones you love. It’s the smell. It’s seeing your child’s body on YouTube or the news, and she is that one, the dead one in the right hand corner, nobody important, no name just another photo that no-one even looks at.

Living in a war zone is living with the loss of your child, all the children you know, every day for the rest of your life.

Working on this piece, is, for me, a way to retell the stories we see every day and cannot comprehend.  It is for the mothers of the children who died at the military school in Peshawar, those whose babies died in drone attacks and for the mothers whose children survive and who every day send them out into uncertainty.   It is for all the parents who struggle with keeping their children safe and, for myself, an acknowledgement that the world is harsh and that surviving every day is a triumph.

Image: A poster found in Merrylands, the area near Parrammatta where many of the Afghan community have settled, Heather Grace Jones and Catherine Fargher