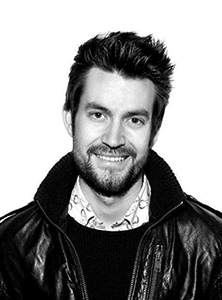 Designer James Browne talks us through his own nightmarish reality TV experience and how it has informed his design for Beached.

When director Shannon Murphy asked me to design Beached for Griffin, I jumped at the chance. I didn’t realise how many hoops I would be jumping through to make the design of this play work.

It’s a play about a 400-kilogram teenager named Arty who enlists as a reality television guinea pig in order to pay for his gastric bypass surgery. Think cameras watching your every move in the privacy of your own home watched by thousands in the privacy of theirs. The design implications are challenging to say the least. Not to mention that the actor playing this character, Blake Davis, is as thin as a rake.

The best thing about working with director Shannon Murphy is her trust in the collaboration with her creative team. She wanted us to take risks and step outside any preconceived box we may have imagined for theatre or multimedia. And so, Steve Toulmin (Sound and AV design), Verity Hampson (Lighting and AV design), Shannon and I spent a weekend away together. Isolated in a cabin in the Blue Mountains we watched numerous documentaries about obesity and surgery in horror and even a few about fat fetishes, just for fun.

It was there I realized I was hiding a secret. My secret was this play was closer to home for me than anyone ever knew.

Like our 400-kilogram central character, I too had been a victim of reality TV. I would love to say that I had been obese once but my secret was far more tragic. Some years ago, broke, believing I could easily outsmart the other contestants and regale my friends with my hilarious adventures in suburban plasticville, I auditioned for a reality TV show. To my surprise I landed a part. I thought that if nothing else, it would be fun. Sadly, this was not the case at all. What eventuated was a humiliating experience. We were treated like animals in a circus zoo, manipulated to do tricks until our wheels fell off, and then stripped bare of all self-respect. We became objects of ridicule under the cold eye of the camera for all the world to see. And other contestants were lapping it up. Unlike a zoo, the contestants were feeding the producers, some knowingly, others not.

The film crew treated my home like a film set. They put my furniture out in the rain and rearranged my entire house. They scuffed the walls with lighting equipment and ripped paint off everything they had stuck gaffer tape to.

It was an invasion.

This was the starting point of the design concept for Beached.

I really wanted to capture that violation of privacy, the invasion of strange equipment into the intimacy of one’s home and personal life. Most importantly I wanted to reveal the crass artificiality of so-called “reality” TV. We want the audience to feel like they are voyeurs, too fascinated and caught up in the ghastliness of it to look away. This is how Melissa Bubnic’s play succeeds, because it forces us to catch ourselves in that moment of wondering “how could they let themselves get to THAT!?” We pass judgment and put ourselves on a higher pedestal than the subject we are viewing. This gives reality television its thriving success in the mainstream.

But it’s not as bleak as it sounds. Beached is the blackest of black comedy and truly hilarious in its comment on popular culture. It is a savage insight into what it is to be really human in the 21st century.

Find out more about Beached here.