In Conversation with Michele Lee 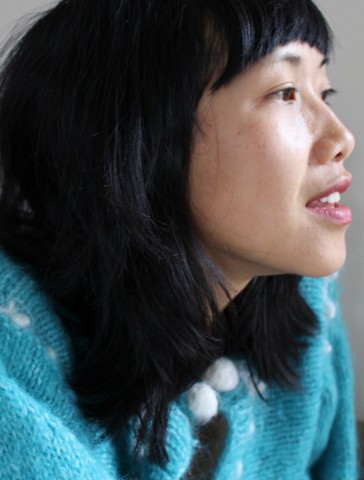 In the lead-up to the Sydney premiere of her award-winning play RICE, Michele Lee shares her thoughts on writing, identity, work and growing up in Canberra in the 90s.

In June, in the balmy Brisbane winter, I watched the opening night of Rice without much expectation. I was distracted. Will, my partner, had missed the flight so he wasn’t joining me and the babysitters were in the apartment with the baby. I had only just put on lipstick and scrambled downstairs to the Billy Brown Studio. Lee Lewis was a little excited, and she bought me a wine.

It is a Very Important Thing to win an award. Winning the Queensland Premier’s Drama Award guarantees a production and that makes it a unique award in Australia. That means I get my first mainstage production, a world premiere.

As the lights went down, I thought: “Holy shit. My play is all grown up.” I’ve been so inside of this play since I began workshopping it. It has been thoroughly dramaturgically thrashed by now. And I think it’s a stronger piece for it. But I’m so inside it, it’s going to be hard to sit back like a regular audience member and let it wash over me. Maybe it’s the wine, and the fact I haven’t really been drinking because I’m breastfeeding. But I relax, and the play — for the most part — washes over me.  Kristy and Hsiao-Ling are fantastic.

The Tuggeranong Valley newspaper once ran a story about how multicultural my high school was. They snapped a picture of sample students outside the staff lunchroom. There were representatives from the various nationalities that made our high school worthy of such a story. I was in the picture (for those who don’t know anything about me, I’m Asian. Specifically, Hmong. Think South East Asian golden skin and thick black hair). For some reason the number 72 pops up. 72 nationalities, if I recall.

Outside of this photo op, I didn’t hang out with the other ethnics. Not really. They were clean cut, they played soccer or volleyball. On the other hand, I had a thing for drama. At lunch and recess, I’d keep myself busy volunteering at the canteen or running (badly) the lunchtime radio. Or I’d float between different groups within the high school jungle. But I never hung out with the Asian girls. They knew it. There was an unsaid acknowledgement of my snubbing them.

And so some of my early plays and early prose writing deliberately avoided anything to do with race and identity. You could say that this was for the usual reason of assimilation — daughter of migrant parents wants to fit in, all her life, through school and beyond, and just maybe she’ll erase her otherness completely. I wrote a memoir a few years ago. I didn’t focus on being Asian. I wrote about being 29-going-on-30, living in Melbourne, having casual sex. Friends, readers, reviewers all wondered why I didn’t focus more on my ‘culture’. Meaning, why didn’t I focus on my family and my ancestry? Why was I being so white?

Or you could say that I am a bunch of labels. I’m Hmong, yes. But I also grew up in Canberra, in the 80s and 90s. I went to a shitty public school. I didn’t quite fit in anywhere. I am what I am.

Aren’t we beyond seeing an Asian woman and expecting that if she opens her mouth, the only thing she’ll do is tell her ‘Asian’ story?

Oh, it’s complicated. I see younger Asian people and think that they’re articulating it more neatly than I do. Being Asian, being Australian, being of a certain generation, of a certain point in time. It’s all about intersectionality. I actually began memoir-writing in high school, and it was about my family. But I was only 15. I had less to write about.

Mrs Swift, my teacher, was moved by a piece I wrote, something about playing in the front yard in the commission house I’d grown up in. She urged me to consider writing as an actual career. In another breath, perhaps as an awkward apology, she also explained that her teenage daughter was terribly racist. It’s complicated, the times I grew up in. Canberra in the 1990s. The waves of South East Asian immigration were evident but were now slowing. My high school was multicultural. Pauline Hansen was about to make her maiden speech. Rachelle Gray sat beside me in English and she must have been seething with her confused anger. All these immigrant children in her country, and yet she had grown to like me. She cornered me one day. “Every time I see a gook, I just want to stab them with a machete and put them back into the boat they came from. But I like you, Michele.” You can imagine, I didn’t quite know what to say. I thought we were friends.

There was a general level of aggression at my high school. Battered sports equipment, teachers fleeing the classroom in tears because of agro students, smokers on the soccer field with their obvious plumes of cigarette smoke. Macho delinquents. Pointless detention rooms — as if the students at my high school cared.

With education like this, what would I be when I grew up? I had a thing for drama, like I said. I wrote that piece about my family that Mrs Swift liked. But I didn’t know any writers, any playwrights, any artists. No, not in the Tuggeranong Valley.

My first play was workshopped by the local youth theatre company in Canberra. I think I’d been reading Absurdist plays at the time, the few available at the library (no internet back then) and I fancied a bit of breaking the fourth wall. I didn’t think my perfect play needed any more help, such was the certainty of my teenage arrogance. I didn’t participate in the workshopping and only came along at the very end to see what they’d done with it. Meanwhile, in my first year of uni studying Comms, I hung out with the student theatre crowd. We put on American plays. We had house parties. There was even a girl from America in a lead role. In fact, there were students from all around the world. And me from the valley, feeling as if the edges of my world were creeping further and further open. Eventually I broke up with my high school sweetheart, worked in the public service, fell into a post-uni malaise, missed doing theatre, felt an existential ennui. I was 22. I moved to Melbourne.

Oh, being a woman. Being an Asian woman. Being a female Asian Australian playwright. It’s taken me a long time to say it with confidence, with a self-assured meaning.

What do you write about? And there is still that little moment of cringe…That Mrs Swift-style awkward and unnecessary apology. I say: “I write about women. About women like me.”

And the reviewers and the readers and the audiences might tell me that I’m not doing this at all, that I could be writing a more authentic version of me.

I did write a piece about Hmong people. It was a dream play that grew into a radio play. At some point, in my later 20s, I became very interested in writing about race and identity and including it in my work. A few of my works are exactly about this. But not all of my work.

I somehow avoided student politics at uni while in Canberra. It was in Melbourne that I had a Marxist awakening. I became very interested in workers’ rights. And all those things, those things embedded from an early age — the commission house, the single income household, the shitty public school, the bogan called Rachelle who held back her machete, the tiny sphere that was my childhood — they boiled up. And a woman like me is someone obviously Asian, someone who worked from age 11, someone who spent her first Austudy payment giving her little sister her first birthday party.

Sometimes I write about women and labour. Production is creative. I’ve always felt that. I’ve always been busy, the girl serving in the canteen and running the student radio (badly).

In this capitalist (post-capitalist?) world, I’ve always been busy at work.

A mother now. It took me 36 years. But there is a baby boy in this house. The baby is sleeping. He’s onto his second sleep cycle. And so I write this post, trying to clear my mind of baby-ness and conjure up my writing bones. Really, the last time I did any writing was probably on Rice, for the final week of the Queensland Premier’s Drama Award development. That was mid-2016. I’d begun researching Rice in late 2013, and workshopped it throughout 2015 through The Street Theatre and through Playwriting Australia, before entering into the Award. Now that I’m older, I relish workshopping.

Pre-baby, Will and I went to India. This was part of my research. I joked with people that I was going on a grant-funded junket. Will had been before to India; I’d never been. But researching and writing Rice, where one of the characters is Indian, was a very compelling reason to do a little research trip.

The obvious things about India: it was very hot and humid at that time of year. We had a steriliser pen for drinking water. Poverty is obvious. But so is wealth. Kolkata may be quiet in some neighbourhoods at 2am but other than that, like other Indian cities, there are people everywhere. And of course, the infamous head wobble that may mean yes, no or maybe.

Other things I observed: people who do construction work often wear thongs as safety footwear, as in South East Asia. Hard-working manual labourers are darker-skinned. You don’t have to walk far for street samosas and street chai. There is a ratio of about five staff to one passenger at airport security.

The other part of our short trip was spent down south in Kerala. The waves at Verkala Beach tore through the ocean and I found them frightening and refreshing in equal measure. One day I trained-it to Trivandrum to meet with a worker in an NGO advocating for rights with farmers. The other meetings I’d set up didn’t eventuate. See — this wasn’t just a sham junket. I was researching.

Women and work. India and China. Big economies. Rice consumption and rice production. I grew up eating rice every day. My mum had a big plastic tub, probably 200 litres big, and she filled it with short grain rice. And every day she’d go to it, scoop raw rice, and then cook it in the rice cooker. We always had rice.

Of course there is a little part of me in Rice. But for this play I wanted to play with characters that weren’t autobiographical but were still women of colour. Intersectional folk. This is the times we live in. A young woman of Indian background, in corporate Australia, with her nose pressed at the glass ceiling.

She could have gone to my high school.

And an older woman, maybe much like my mother, thrifty with her vats of rice, cleaning the shit off the toilets of corporate Australia.

A Note from Lee, 6 July Thank You