Your favourite Friday night variety hour is back and better than ever!

UP LATE features a hand-picked collection of nocturnal performers, music-makers and storytellers who take over Griffin to make some very entertaining noise until late (well, 10.30pm, so pretty early actually, but you get it).

Musician, songwriter, jazz vocalist, accordion player and one quarter of All Our Exes Live in Texas. Elana’s genre shape-shifting has led to collaborations with the likes of Passenger, Washington, Donny Benet, Urthboy, Hermitude, Tripod, Josh Pyke and Ngaiire among many others. Her unique and enchanting live performances have served to make her one of Australia’s most sought after vocalists. Since her previous band The Rescue Ships parted ways Elana has spent the better part of the last two years touring with her four-part lady folk band All Our Exes Live in Texas to sell-out crowds around Australia while continuing to write and perform as a solo artist.

Enchanting songsmith and guitarist Leroy Lee creates intimate and hypnotic, lamp-lit folk songs, drawing the listener into his unique world. From driving guitar riffs to intricate finger-picking melodies, Leroy is reminiscent of English folk legends like Nick Drake and Bert Jansch. Float along on his melodic tendrils, and be uplifted by his refreshing vocals. This is one performer guaranteed to leave you with a contemplative smile.

Sabrina is from Australia, which is a small island off the coast of New Zealand. She was born the world’s first puppet-human, or ‘pu-man’, and was operated by her mother via umbilical cord for the first few minutes of her life. Her more recent achievements include completing a Bachelor of Acting from Theatre Nepean (2006) and a Post-Graduate Diploma in Puppetry from the Victorian College of the Arts (2008). She has also been a recipient of the Australia Council’s ArtStart (2011) and JUMP Mentoring (2013) grants. Sabrina works as a Clown Doctor in children’s hospitals across Sydney. Some of Sabrina’s recent performance credits include: Support for Amanda Palmer’s Sydney Festival season (2014), Why Do I Dream? (Various seasons, WINNER – BEST COMEDY at NZ Fringe 2014), Body Poet (Melbourne International Comedy Festival, 2013), and The Bedroom Philosopher’s High School Assembly (Melbourne International Comedy Festival, 2012).

Have you heard the story of Oliver Twist? Despite what popular opinion suggests, our Oliver was born in Rwanda. Due to genocide, in 1994, he and his family were forced to flee to Malawi, and by 2014 they had come to settle in good old Brisbane, mate. After discovering an untapped passion for hot chocolates and sushi – Brisbane is where you’ll find our protagonist today. Rather than be defined by a turbulent past, Oliver finds a catharsis through flexing his creative muscles in comedy, acting and poetry. He charismatically explores his immersion into fresh cultural and political climates, and regales his diverse and deeply personal experiences, with an expert humour and enviable deftness that will leave you wondering—how can I politely ask for more? 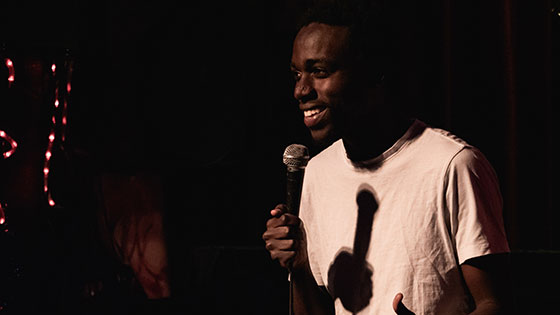 Open
The final (and possibly most colourful 🌈) Griff

Open
The final Griffin UP LATE for 2019 is TONIGHT! Roc

Open
Did you catch last Friday's Griffin UP LATE? The S

Open
This Friday, Griffin UP LATE is back bringing you

Open
Looking for a fun way to welcome in the weekend? T

Open
Looking for a fun way to kick off the weekend? Joi

Open
Another pic from Friday’s Griffin UP LATE. Singe

Open
The next Griffin UP LATE is just one week away! Ha

Open
The final (and possibly most colourful 🌈) Griff

Open
The final Griffin UP LATE for 2019 is TONIGHT! Roc

Open
Did you catch last Friday's Griffin UP LATE? The S

Open
This Friday, Griffin UP LATE is back bringing you

Open
Looking for a fun way to welcome in the weekend? T

Open
Looking for a fun way to kick off the weekend? Joi

Open
Another pic from Friday’s Griffin UP LATE. Singe

Open
The next Griffin UP LATE is just one week away! Ha

Griff Garage Sale happening right now at our costume store, 91 Canal Road Lilyfield. Head down to score yourself a bargain! Closes at 3pm 👚👖👗👔🩳🩱👡👢👟🥾🧢🥼👒👑