Ella Butler is the Designer of Rita Kalnejais’s First Love is the Revolution. She’s behind the astro-turf wonderland that is the set, as well as the hilariously on-point costumes that build the animalistic world of the play. The Griffs sat down with Ella to ask her about all things design!

What made you want to become a set and costume designer? How did you first start out?

I studied at NIDA—I did the undergraduate Design for Performance course—and before that, I was at school. I did the high level Visual Arts program in the International Baccalaureate, and that’s kind of what I used as my body of work to get into NIDA. I didn’t have too much experience with theatre before going to NIDA, but I knew I wanted to do something that was text-based and somehow interpreting space. I originally thought that studying Architecture would do that for me, but I also loved English and reading plays, and when I heard about the NIDA Design course, I thought it was the perfect intersection between architecture and interior design, visual arts. I interviewed for NIDA after the applications had closed—I sent this frantic email because I found out about the course really late in the year. Essentially, it was through the course at NIDA that I started to meet people, learn, and start designing for theatre. But I’m still learning, still becoming.

After finishing NIDA, I was designing independent theatre with mates, and then I got lucky and was offered a gig to design for Tim Minchin’s music video. That was awesome, and I’ve gotten a lot more work from that with Tim—I did another music video, and I just designed his tour, which was great. 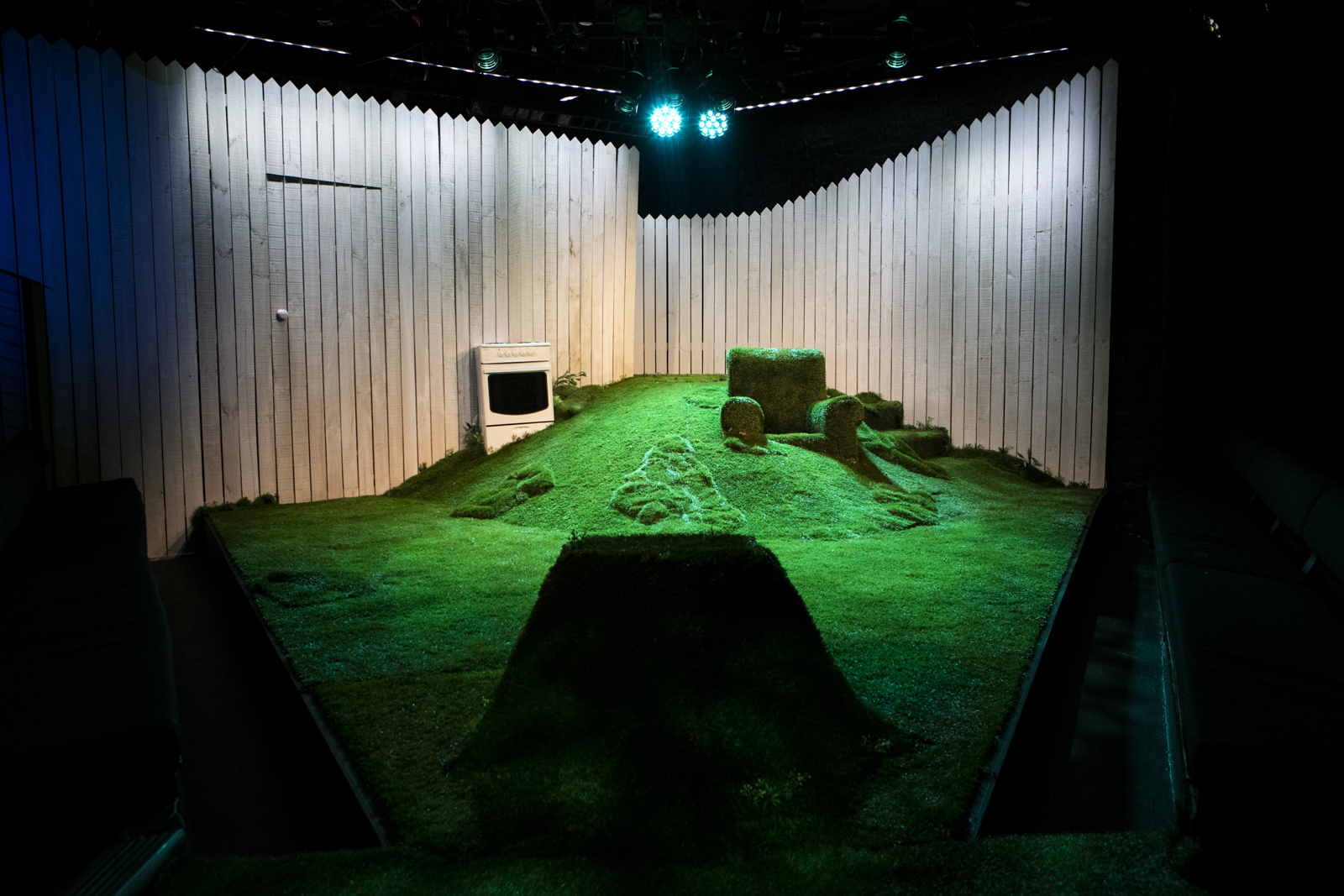 Do you have a design process that drives your work?

When I’m designing for theatre, I like to ask the director I’m working with how they like to receive design materials, because often, my preferred method of communicating original ideas is collage, and sometimes that really confuses people, because it’s not to scale and it’s usually quite messy. I don’t spend a lot of time kind of cleaning up edges, it’s all just kind of mashed together, but the idea behind that is to convey an original feeling. However, I always take a cue off the director first, and see if they respond well to the collage, and if so, I’ll continue using that method throughout the design process. From there, the director and I will work through a sketch model together—a sketch model is a really rough model of the set that we can break up and crack apart together. Depending on how conversations go with the director about the play’s themes, and what they think is really important, how the play makes them feel, what spaces it reminds us of, things like that… with those conceptual conversations, referencing images, a collage and a model, we then refine the design from there: it’s refine, refine, refine. 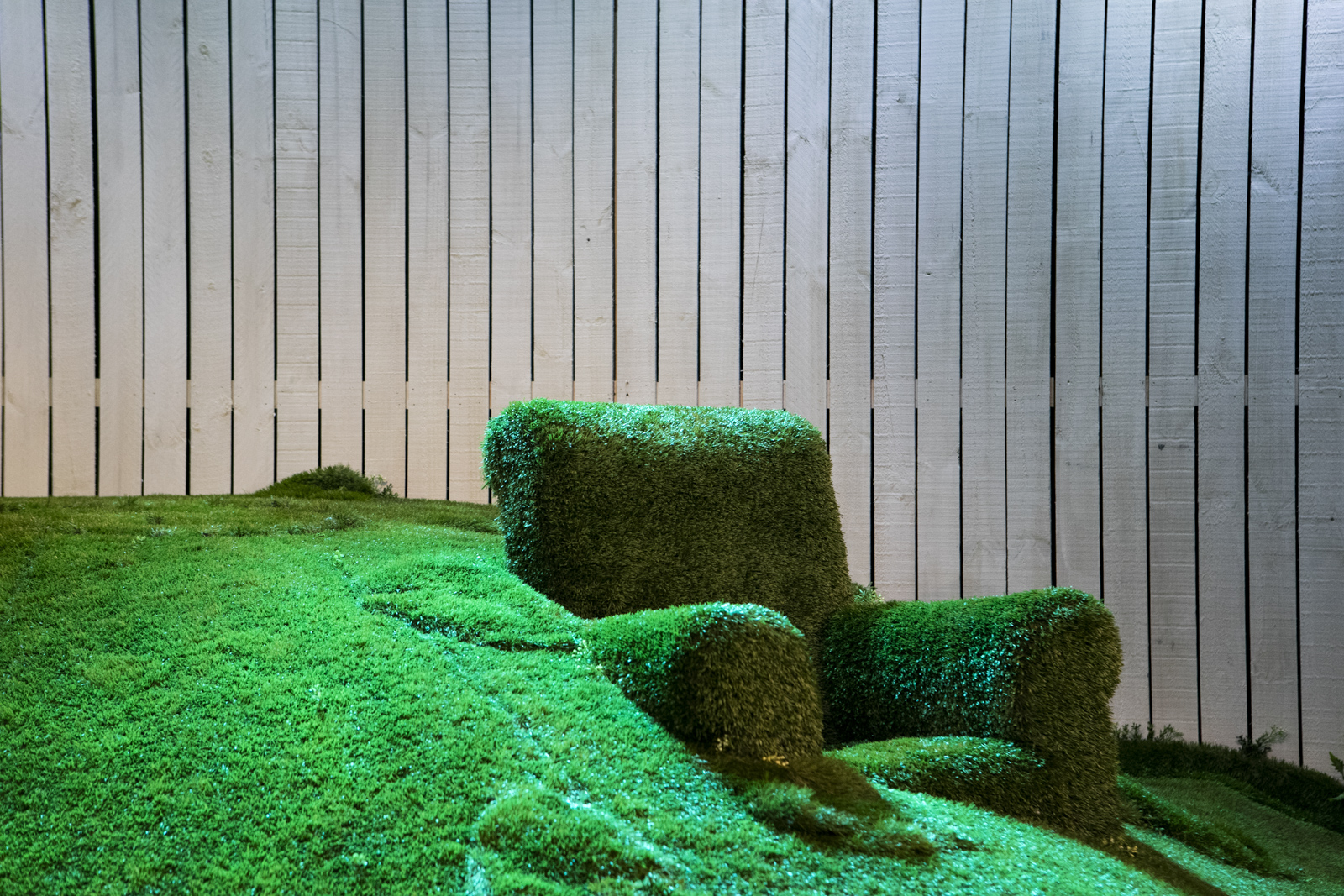 What inspired the set and costume design for First Love is the Revolution?

For First Love, we had all the astro-turf on hand already. It was great because we had all this material that we could start working with. It’s funny—that’s not usually how designing a set would go, material first—but astro-turf was the perfect thing for the set, plus it was already kind of a given that some sort of natural material would be present in the space. It was actually a really good starting point. From there, we sort of went through an ingredients list of things that Lee Lewis, the director, really wanted and needed in the space—like a masked entry onto the stage. A lot of the design process was logistics: thinking about where we needed people to pop out, and how things were going to fit, like an oven and an armchair. I was quite nervous about the picket fence masked entry, but because of Lee’s experience in the Stables, she knew it was possible, and that took me a little while sort of shape that, to make sure audience sight lines would be OK.

The tapering fence line is actually one of my favourite elements of the design now. I had this image in my head about how it would work, with the actors disappearing down the onstage stairs which were masked from the audience, that would produce a kind of spiral effect. Dana, Griffin’s Production Officer, and I spent hours planting the little fake flowers in the astro-turf, so I think that’s a fun design element too. It was really great collaborating with Trent Suidgeest, the show’s Lighting Designer, because he had so many great ideas about keeping the space really active, and I’m always conscious of static space. But there is so much action on the set for this show, and what Trent’s done with the projection and creative lighting choices, it just breathes life into the design, which is really important. I think it’s amazing what he’s done for the show.

As for the costume design, we definitely knew we didn’t want any direct animal references. Instead, we wanted to convey the personality of a chicken, or a black and white cat—what their human reflection is. Have you ever played that game where you sit there with your dog, and you imagine what career would they have if they were human? The costume design was kind of like playing that game in a way. 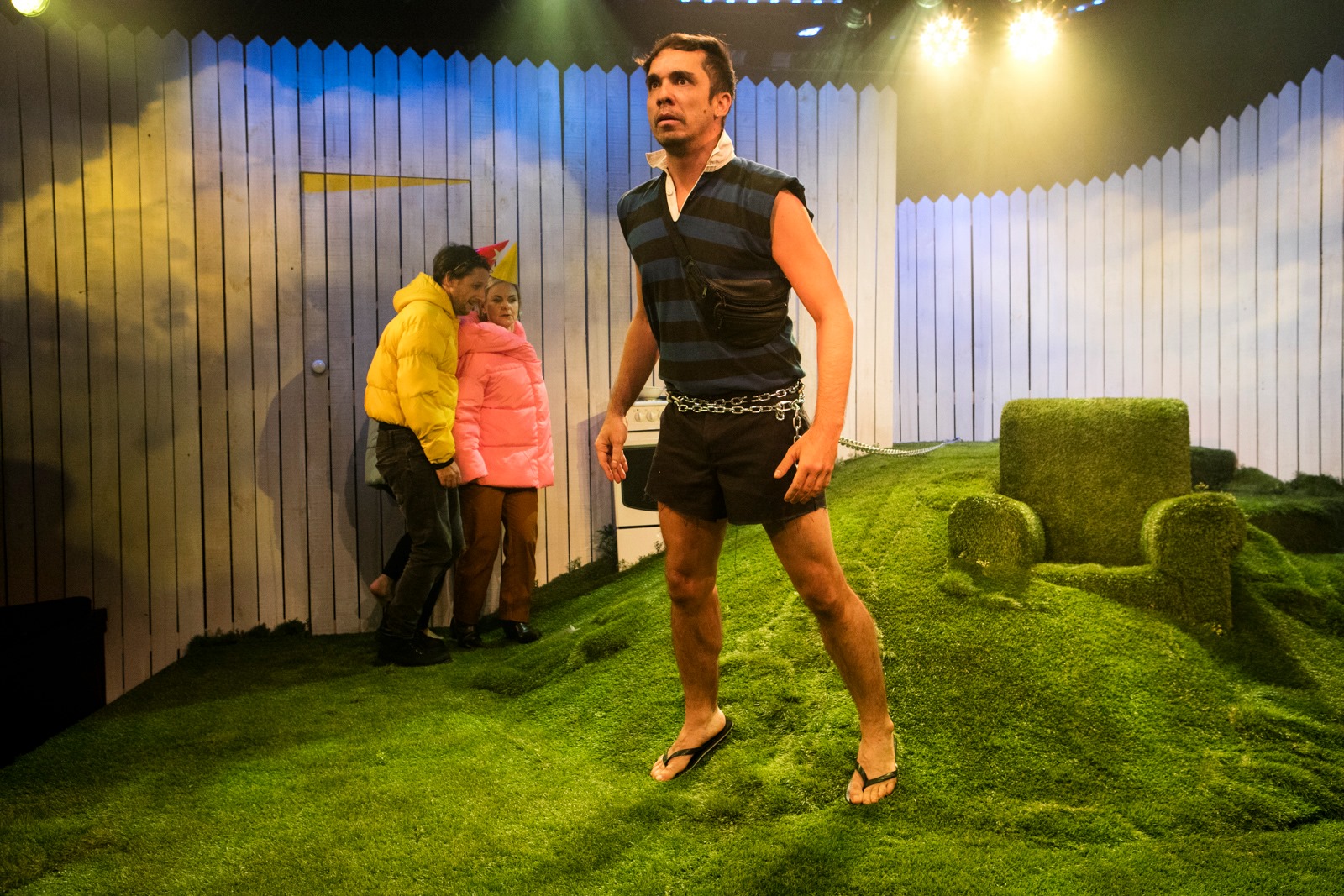 Take the costume design for Rovis the Alsatian, where we were going for a deconstructed Canterbury Bulldogs jersey look, with the thongs and the bum bag—a kind of street-style, working class look. Conversely, the chickens are in these puffer jackets and party hats, which were a bit more abstract than the rest of the designs, but we knew that the shape that they were creating was right. The party hats only made their way into the space because of Lee’s birthday, so it was a complete fluke that the actors put them on in rehearsal and we went “Ah! That’s pretty chicken-y”. Then for Smulan the cat, we kind of went for a gym junkie, slinky sort of vibe. As for the foxes, it was important to Lee that they have their individual personalities—Cochineal, the mother fox, has liberated her kids by allowing them to have the freedom of being whatever version of a fox they want to be. So even though the fox costumes are all different, they are tied in through colour palette to make them cohesive. 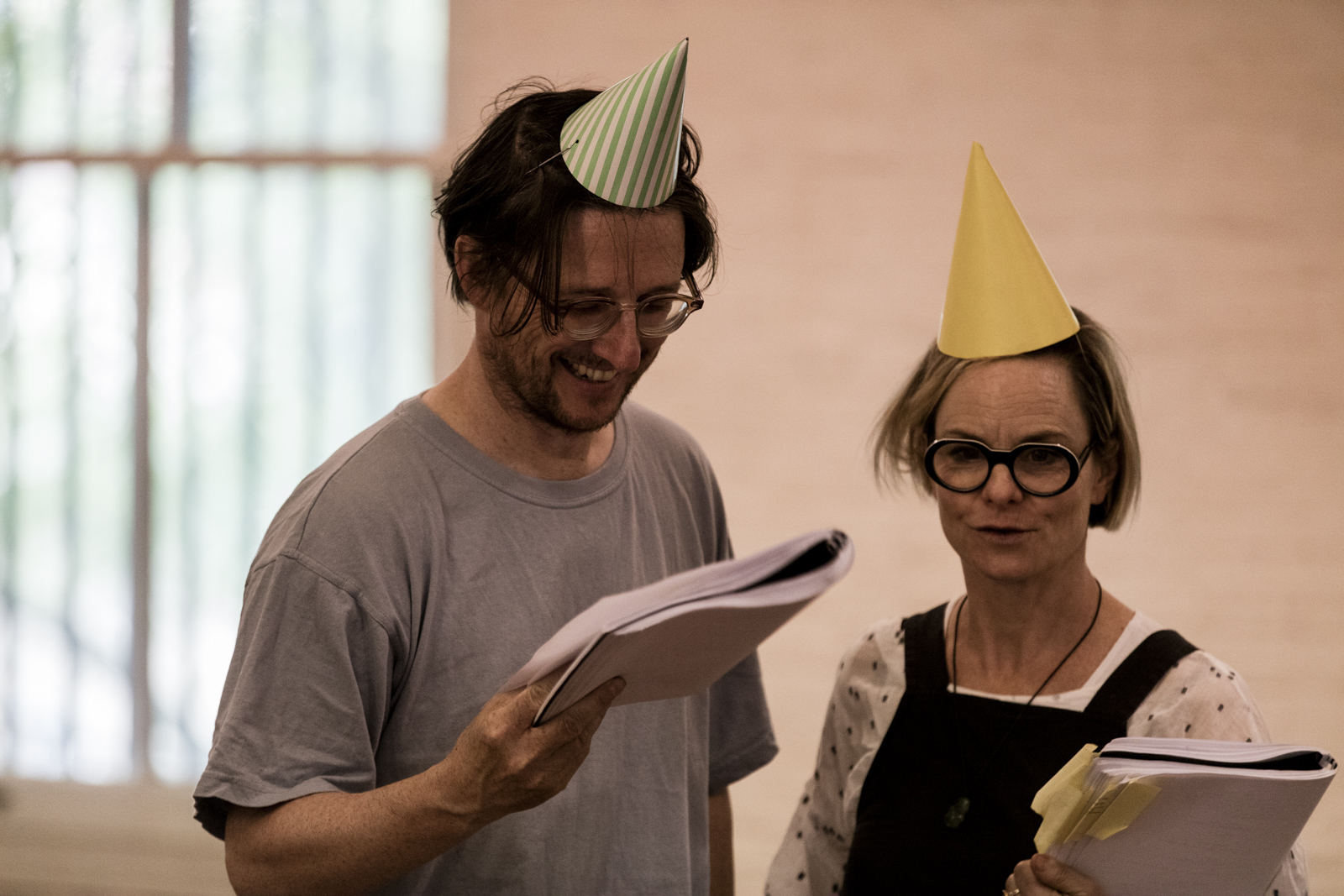 Also, the collaboration with the set construction company Pier was so important for this show, and the Griffin production team of Ryan and Dana were both brilliant as well, because it was really important to create the set with some really experienced hands on board. We couldn’t really put all of the details into the plan, just because of the nature of the incline and the mound structure on stage. It needed to be built for safety and structural soundness, and I didn’t have those skills, so Pier, Ryan and Dana were a really huge help. It was amazing to have that support for the design of this show, because otherwise, the set wouldn’t have been possible, I don’t think.

First Love is the Revolution finishes its run at Griffin this weekend. 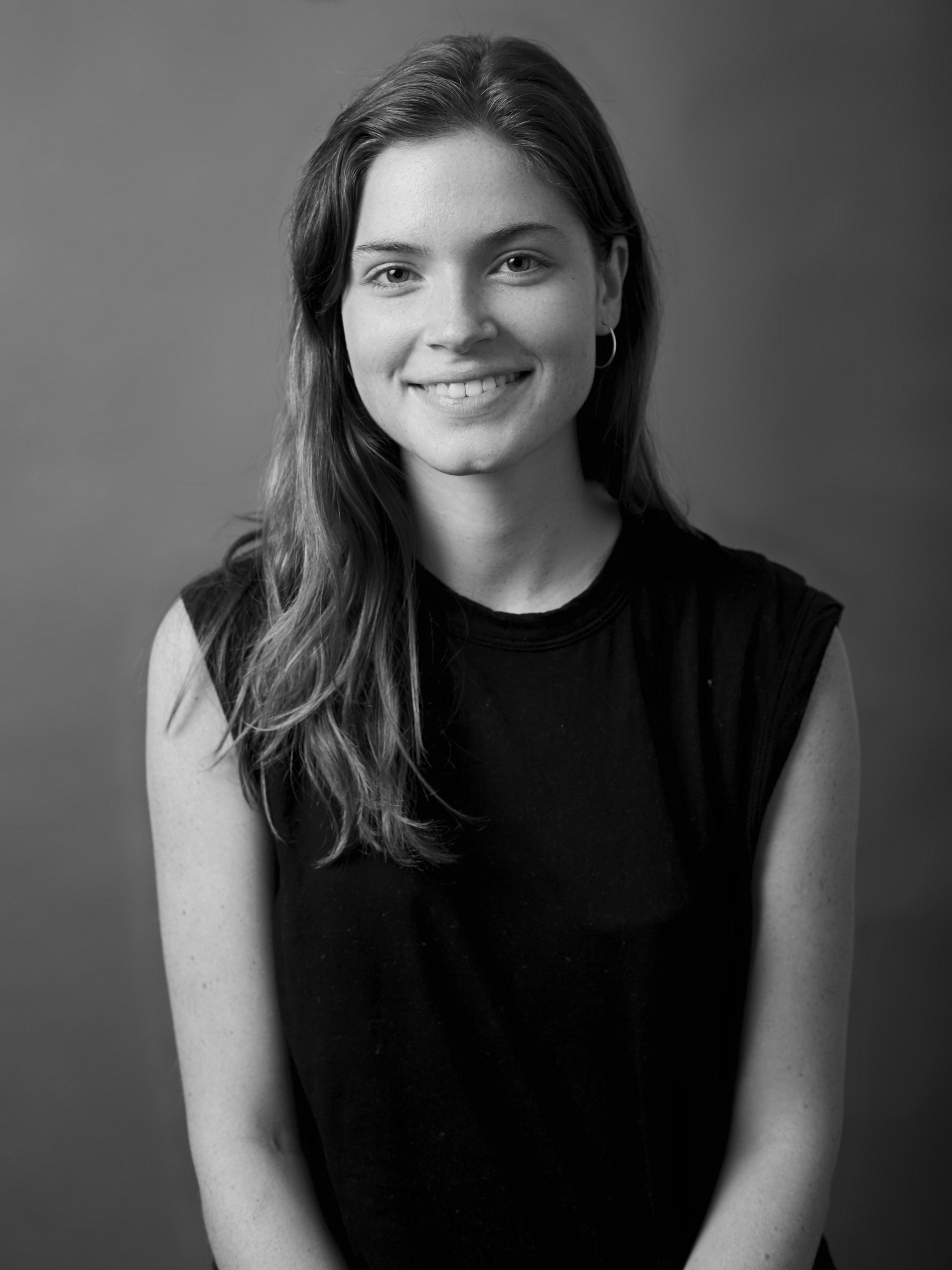 A Special Announcement from Griffin A Note from Lee, 19 December