Porn.Cake director Shannon Murphy has been taking Berlin by storm with performance group SandS through the hourglass’s production of the The One-Eyed Man is King for the Schaubühne Festival of International New Drama in Berlin. This week, Shannon gives us a glimpse into her time in Berlin.

Our time here in Berlin has really flown by. I had one of the best and most humorous days of my life in a German production meeting trying to translate ‘dragon pinata’ and ‘fake vagina’. Everyone ended up laughing so hard we could hardly continue the meeting! 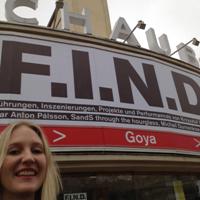 Our show involved 200 masks that the audience wore, a cross bow, barbies and a Whitney Houston ballad!!! Jan Papplebaum was our designer (which made me beam because I have his book on my coffee table at home). We also had a great sound designer, Nils Ostendorf who pumped out some incredible sound. Other than our usual SandS duo Simon Corfield and Sarah Enright we had two new performers in the show; Sophie Cape and Dan Wyllie.

Production shots of the show and how it all went will come shortly, but for now here is an article from ExBerliner who have labelled us ‘Splatter Theatre’! Click here to read the article.