Just because our theatre’s dark, doesn’t mean the Griffs aren’t continuing to work hard behind the scenes! Welcome to the first of our series of Staff Tutorials, which will hopefully bring you some joy and creative thinking while at home.

Here on the Griffin blog, we’ll share amazing creations/stories/ideas/hobbies from our staff as we keep ourselves busy during lockdown. Read on to learn about Frankie’s (our beloved Associate Producer, Development!) meaningful love for apple crumble, interviewed by Marketing Assistant-extraordinaire Rebecca Abdel-Messih. Recipe at the end! 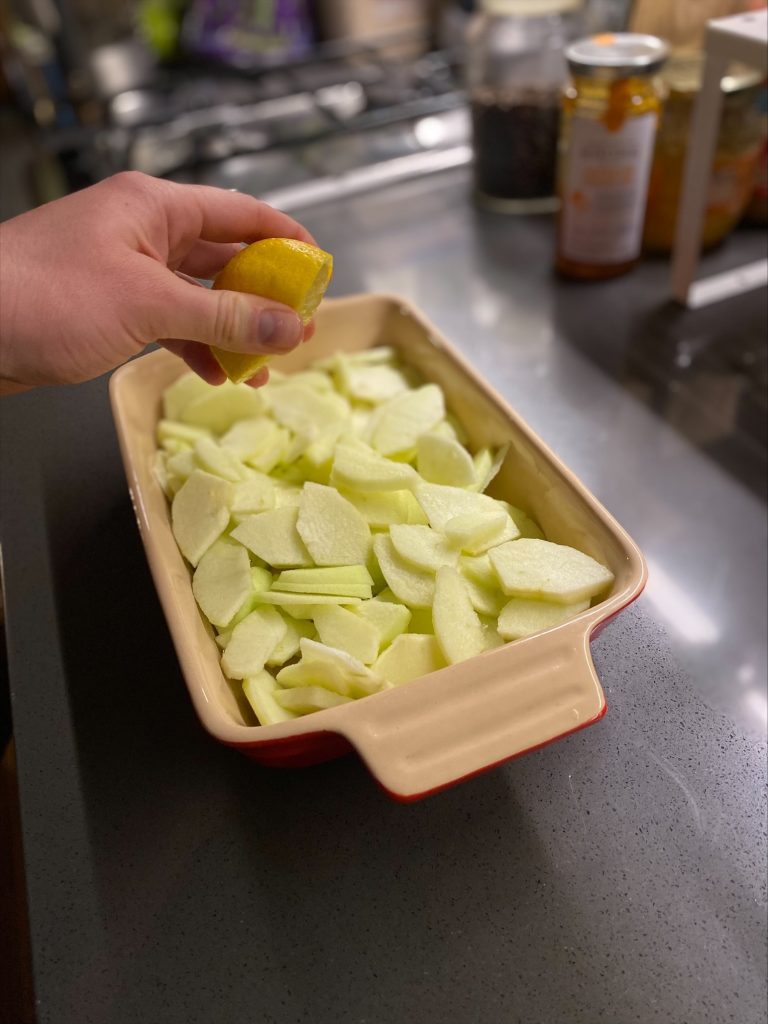 Rebecca: Thank you for being our very first guest on Staff Tutorials. Let’s start off with your name and role at Griffin.

Rebecca: Let’s talk about the apple crumble! How did you come across the recipe?

Frankie: So, it was a recipe that I grew up eating. My mum used to make it and it was usually a special Saturday treat during winter. It was usually when she had probably enough of the kitchen and created this crumble to appease our needs. 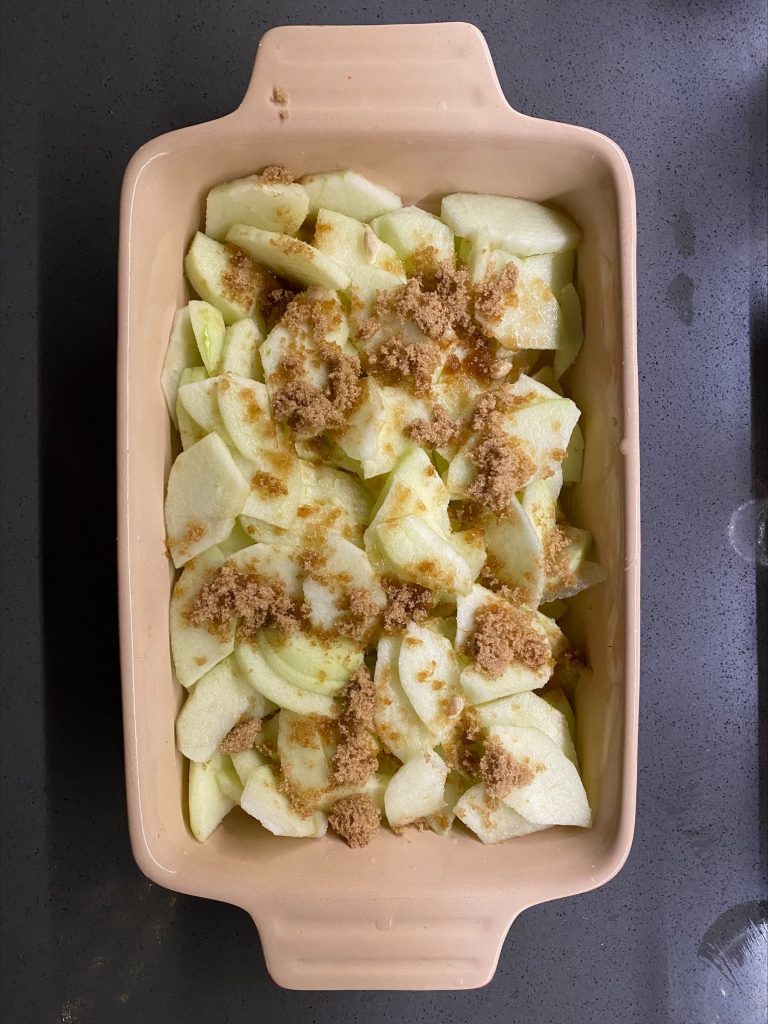 Rebecca: I used to make apple crumble when I was younger, but I just forgot about it! This has inspired me to give it another try, and you’re right, it’s such a good winter dish and it’s not that hard, is it?

Frankie: No, it really isn’t!

Rebecca: What has been the highlight of creating the dish?

Frankie: Oh gosh, well eating it, definitely! And maybe sneaking some brown sugar for me as it goes into the bowl, is always something I’ve done since I was a little kid. I think there’s still something in me that feels naughty doing it and therefore it feels like I should! I think it was something that I used to try and hide from Mum that I was doing in the kitchen. I would sit there with the brown sugar and a teaspoon and have one for the bowl and one for me and hide doing that! I like creating recipes that have a family connection to it and that we all make. We have this family group chat, and we send each other photos of our food that we’re very proud of, and it’s usually Mum or Dad’s recipe, both parents are very good cooks. It’s just sharing memory, which I like. 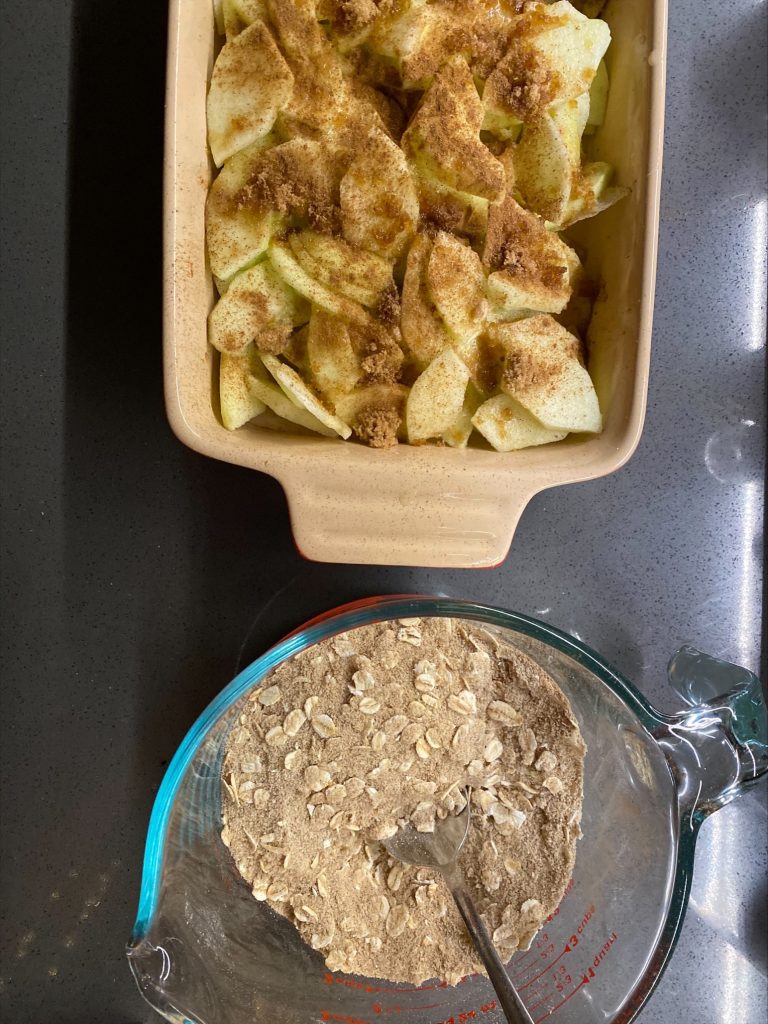 Rebecca: That’s so nice. But brown sugar? Sure!

Rebecca: It’s probably its caramel-like flavour. I think I understand the appeal and where you’re going, but…

Frankie: It’s so gross, a person in their thirties eating brown sugar out of a jar.

Rebecca: No! It’s not gross. There are certainly worse things out there! That leads me to my final question. If you were to create this dish again, would you change anything?

Frankie: Can I say I really nailed it?

Rebecca: You can say that!

Frankie: Maybe I’d make more? Actually, because mum made one the same night, we were swapping notes, and she added frozen raspberries and that looked pretty amazing. So I think I might do that and I’d possibly add more apples because I may have got the crumble to apple ratio slightly off. However, it benefited us in the long run, we got more crumble, so it was fine!

Rebecca: Yum, that’s definitely the best part! Thank you for sharing that with us. If you at home would like to recreate it, keep reading for the recipe. Make sure to tag us (@griffintheatre) and show us your creations! 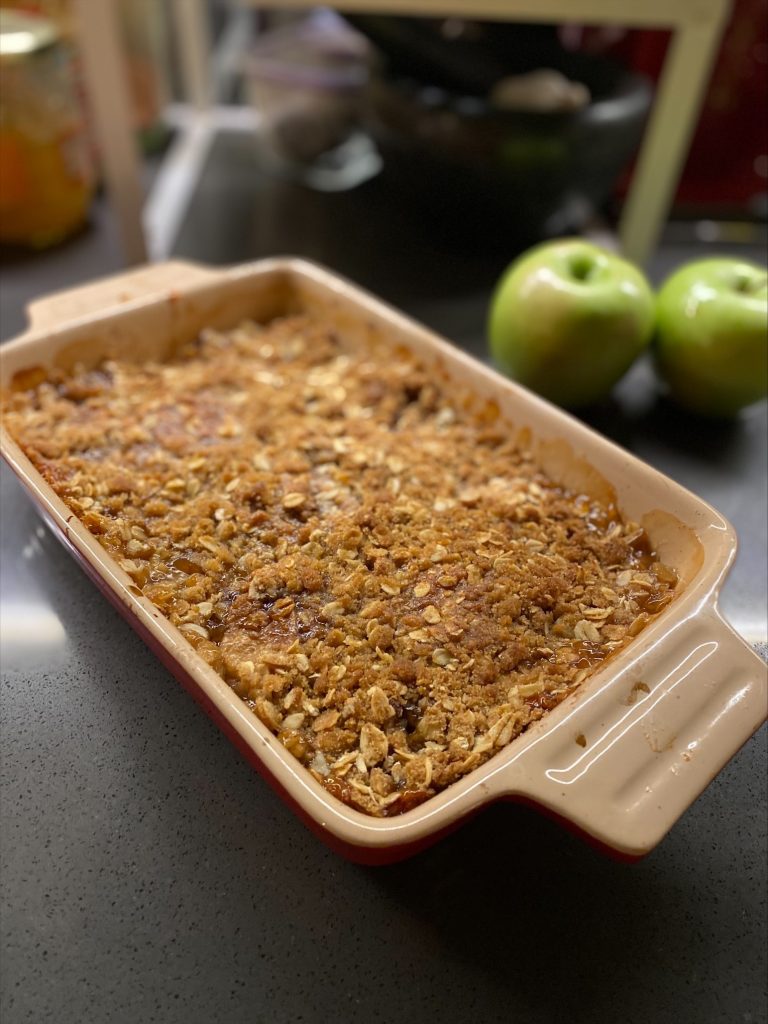 Peel and thinly slice apple and arrange in a baking tray.

Squeeze the juice of one lemon onto the apple along with a quarter of a cup of water.

In a separate bowl, mix together the brown sugar, oats and flour. Add to this a healthy shake of cinnamon (I like mine super cinnamony! Yes, that is now a word) and a pinch of salt. Rub in the butter with your fingertips until the mixture binds a little. Sprinkle crumble mixture evenly across the apple and finish with a few extra knobs of butter on the top for a little extra indulgence!

Serve as you like it! I like it as it comes, but it’s also hard to say no to a scoop of vanilla ice cream on top.

Stay tuned for more Staff Tutorials from all of us at Griffin! Stay safe, Grif-friends.