10 minutes with Nicholas Brown from 'Lighten Up' 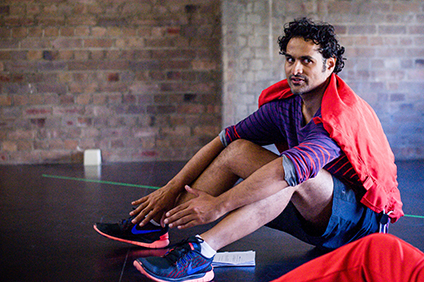 Griffin’s last indie show for 2016, Lighten Up, is currently in rehearsal. This very funny play by actor Nicholas Brown and comedian Sam McCool tells a universal tale of identity, cultural assimilation and bleaching your bits. As we move closer to opening night we’d like to introduce you to the amazing creative team. Meet Nicholas Brown, actor, writer & Bollywood leading man…

Who is Nicholas Brown?
Nicholas Brown is currently a dog whisperer, an obscure plant enthusiast and an essential oils fiend. I like Myrrh these days. Patchouli be gone.

Who inspires you and why?
As an artist I’ve always been inspired by Bjork. Her lyrics have struck a chord with me since I was a teenager. I get annoyed when people call her ‘weird’ because I think she writes about very human things, the body (inside and out), the universe, plants, planets, technology. She’s inspirational in every way. I’ve always been inspired by Meera Syal too. I think she’s a terrific actor but has also managed to write and produce her own TV shows and films. She’s an accomplished author as well. Her ability to jump back and forth as a writer and actor is something that I’ve always wanted to do.

What would you do to make a difference in the world?
Being of Indian and British origin, I would do whatever I could to abolish the caste system in India. It’s something that disturbs and upsets me deeply. It’s a hangover from the British rule and is so deeply engrained in the Indian psyche. It makes equality in India nearly impossible. I’d also do whatever I could to raise awareness for Indigenous Australian rights and to promote the preservation of Indigenous culture.

Favourite holiday destination and why?
I’m obsessed with Iceland but I’ve never been. I went to Tulum in Mexico a few years ago and that was probably my favourite holiday. Tulum is an ancient Mexican town by the water and it has a hypnotic power over its people and the tourists that go there. Ancient Mayan ruins are everywhere and huge lizards walk around overseeing them like gatekeepers. They stand on cliff tops looking out to the ocean as if they know ancient secrets that you might only discover if you drink less tequila and walk barefoot. I had a profound trance-like experience when I went into a temazcal to get blessings from an Aztec shaman in Tulum. It was unforgettable.

What are you currently reading?
I’m reading The Manual of Psychomagic – The Practice of Shamanic Psychotherapy by the incredible Alejandro Jodorowsky.

What are you currently listening to (or watching)?
Owen Pallet’s last album In Conflict. It’s breathtaking. I bought the Young Talent Time cast album from 1987 on LP and have been listening to that on my record player. It’s brilliantly awful. I’ve been trying to watch Mike Leigh’s new film Mr Turner on DVD but I keep falling asleep. Their British accents are so broad, I fear I may need subtitles. Multicultural ambassador fail.

Happiness is?
A Labyrinth Masquerade Ball.

What does the future hold for you?
Truffles.

Why do you think a show like Lighten Up is important?
Lighten Up is my attempt to make some sort of shift to the Australian psyche – to bring an awareness to the underlying racism we have here that is not always seen and felt. It’s a story about owning and celebrating one’s identity no matter how mixed up it is. Despite being a laugh out loud comedy, it very much has political and spiritual agendas. Much like me.

What’s your most memorable performance/production to date?
Barry Kosky’s Mourning Becomes Electra. I was nineteen and was completely electrified by the show. I like to be electrified in the theatre.

Favourite Bollywood move (or movie)
I like to dance my own steps and to create my own Bolly dance moves. I have a signature creation but it’s very hard to describe in writing. It moves through five actions in a few seconds and is sort of the running man with the legs being pulled backwards in the other direction. Hard to explain but take my word for it, it’s totes groovy and cultural at the same time. Favourite Bollywood film is an Aussie Bollywood movie called Lighten up. It hasn’t been made yet but the lizards from Tulum told me it would be soon.